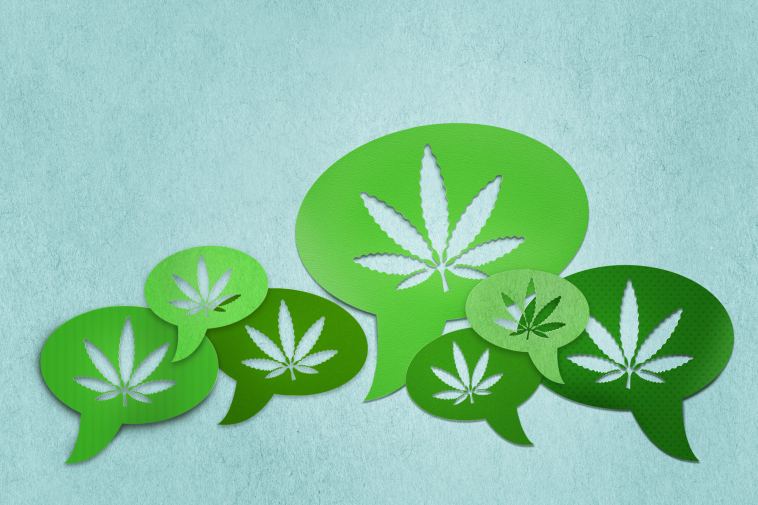 Cannabis can be a contentious topic despite its legal status and chances are if you’re home for the holidays, it’s going to come up.

When it comes to cannabis and parents, things tend to go one of two ways. Some parents want to blame weed for the world’s problems, others want to spark a joint with you.

My own parents tend to fall in line with the former. Like with most issues that arise in this world—we deeply agree. On politics, on science, on what to cook for Christmas dinner. However, cannabis is the one issue I haven’t been able to reason with them on.

They were raised by a generation who bought into the whole Reefer Madness scam, so I can’t blame them for it. But as I approach another holiday at home, I wonder if there might be a way to break through their brick wall.

Lizzie Post, author of Higher Etiquette, and great-great-granddaughter of renowned etiquette expert Emily Post, has some helpful advice for anyone in this situation.

“Ask permission to have the conversation first, which is a tactic we often bring up in etiquette when talking about a sensitive subject,” she notes. “Get them to buy into the conversation so you’re not just talking at someone but hopefully getting a chance to talk with someone.”

The boomer generation grew up with decades and decades of anti-cannabis propaganda. That prohibition mindset doesn’t disappear overnight.

Post also points out the power of your tone and the benefit of taking a step back before engaging to calm yourself and remove any defensiveness from your voice.

“I try to hear in my head the voice I’m looking for before I talk—this can mean taking a minute to collect yourself.” She suggests first validating their perspective and acknowledging the concerns they have, and then try asking to present your viewpoint on the issue.

“Some people still shut down, but some will try to have the conversation with you.”

Another advocate, Chela Coenen, who runs the podcast Cannabis Helps Dementia, has firsthand experience with the challenges of navigating medical cannabis use with a parent.

After years of testing various medicines, the most effective treatment she found for her mother’s dementia diagnosis was cannabis. Coenen noted that the best way to talk with your parents about the plant is to focus on the “non-intoxicating” benefits.

“Find a story of someone they can relate to who is benefitting from cannabis in the news, or a study to talk about,” she said. “I also bring an effective topical salve to offer up for aches and pains, without getting anyone high.”

Post agrees, noting how important it is for them to see shining examples of cannabis consumers or patients who are successful and happy in life and work.

“My parents have seen cannabis in my life, yet they haven’t seen my work slow down, or my enthusiasm for friendships and socializing slow down. A lot of the impression, when drugs or any substance are viewed as a bad thing, is because we see it impacting lives negatively,” shares Post.

Jessica Mac, a writer and marketing specialist from Salt Spring Island, BC, knew her dad smoked weed but it was something they never talked about. As a teen, she recalls the smell in the garage that made her realize her dad was a smoker, but she never approached him about it.

It wasn’t until she started writing about cannabis as an adult that he slowly started to open up about his own usage. Sometimes, sparking up the conversation can be a powerful tool for normalization.

“One summer I went home to visit and he was growing cannabis in his garden, and that kind of opened the door because he saw I did knew what I was talking about. I bought him weed seeds for Christmas, and now he comes to me for advice about it.”

The boomer generation grew up in a time where using cannabis was seen as purely recreational—and prohibited.

While some boomers certainly have helped destigmatize weed, many fell prey to the counterculture of it all, something they couldn’t necessarily relate to.

“They’ve had 60 years of being told it isn’t good,” Post noted. “The people who were putting it out there in the heyday were part of a counterculture movement that was purposely trying to dress, look, and act differently.”

Post explains how difficult it is to expect someone to immediately change their mind. Especially after decades of only seeing one representation of what a cannabis consumer looks like. It takes time to see the multifaceted aspects of cannabis and its role in society.

And even post-legalization, the Reefer Madness fear still plays on repeat in their heads.

“The boomer generation grew up with decades and decades of anti-cannabis sentiment,” Mac told Leafly. “My dad—even though he’s very pro-cannabis—he’s still afraid to talk about it on the phone or even mention it in an email.”

“He still calls it his ‘tomato plants.’ I asked him if I could get him a little pipe for a gift and he said ‘no, no, no’ because he was really afraid he would be caught with paraphernalia. So I think a lot of boomers have all of these hang-ups about it.”

Post’s final piece of wisdom—acknowledge that cannabis is just a plant, it isn’t inherently bad or good. She explains that there are negative aspects that are important to acknowledge, especially from it still being illegal in most of the world.

“Trafficking, crime, and people being hurt from [prohibition] is a bad thing—legalization [can help] eliminate the bad things that come from it. We have legal guns, alcohol is legal, tobacco is legal, there are a lot of so-called ‘bad’ things out there that are totally legal.”

Legalization allows people to be fully educated about the risks and benefits of cannabis, without having to rely on illicit sources.

“Getting people to really understand and see the whole picture—the good, the bad, the ugly, the wonderful, the miraculous—all of it,” Post said.

And at the end of the day, that’s all you can really do.

How to talk weed with your parents during the holidays originally appeared on Leafly.com