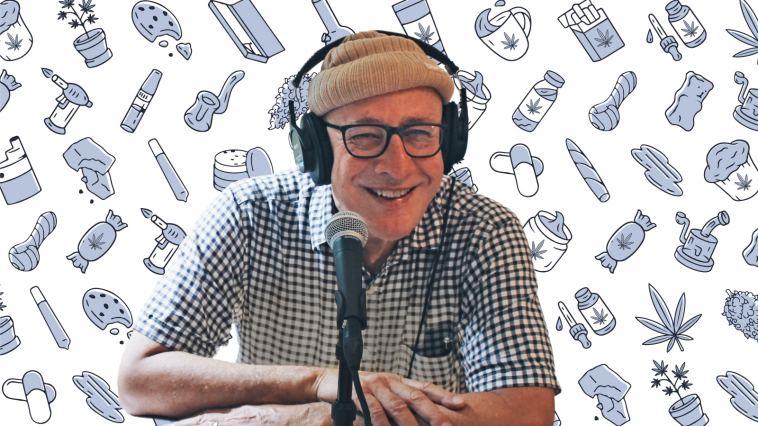 David Hershkovits is a lifelong advocate of what he calls “cultural disruption.”

As a journalist, culture critic, co-founder of Paper Magazine, and host of the Light Culture podcast, Hershkovits has had a front-row seat to cultural disruption in America in every phase of his career.

“The street to me has been the major disruptor that sort of took away the [cultural] power from the ‘high art.'” Hershkovits told Weedmaps. “There was this idea of high art [in New York City] which was opera and symphonies and museums with gatekeepers who decide who can come in through the door. The gatekeepers over time lost their edge because street art and streetwear became the big thing.”

Hershkovits observed this pattern of disruption over and over since he was five years old, when his family immigrated from Israel to Brighton Beach, Brooklyn. From an early age, Hershkovits felt the pull of culture because he couldn’t shake the sense that culture was the route through which to find his place in this new world.

“That’s how I felt I would become an American, by immersing myself in the culture.”

In 1967, Hershkovitz went to San Francisco during the Summer of Love. That’s where he had his first visceral, lightbulb-moment encounter with cultural disruption. At that point, he had already started experimenting with substances like cannabis and acid, which created an inextricable link between cannabis and the counterculture experience.

As a young journalist in the early ’80s, Hershkovits started covering news for SoHo Weekly News, a competitor to the Village Voice that was, according to Hershkovits, reflecting the culture of that moment a lot more than the Voice. And though tied to the news desk, Hershkovits was in love with the music scene, so he used his press credentials to get into the clubs. SoHo News folded in 1982, and within a couple years, Hershkovits and fellow SoHo alum Kim Hastreiter created the first iteration of Paper Magazine.

“We started as just a one-sheet,” Hershkovitz clarified, “it was super small, very little money, so it was very indie and local. We got a lot of local people to advertise. We started with this foldout. It had a monopoly board of ads around it, each one was $250, and it added up to $5000. That was the print bill for the 10,000 copies or whatever we made of it at that time, and that was the thing.”

The early days of the magazine were largely profitless and fueled by a belief in the New York art and fashion world that was just starting from the ground up. Today, we take for granted the idea that brands like Gucci or Louis Vuitton and cutting-edge artists and designers can occupy the same space. But in the early days of Paper, the distinction between “high art” and “street art” was more clearly defined, and those were the lines that Hershkovits wanted to disrupt.

“I think that’s why we succeeded all those years later,” he added, “because all those people that we were supporting early on, and a lot of the photographers, all became super successful and famous. All these young people started to make t-shirts with designs. Supreme started back then. So that, to me, was the most disruptive factor. And hip-hop certainly was a huge part of that.'”

If you bring up Paper Magazine today, most people will think of the Kim Kardashian cover 2014’s “Break the Internet” issue.” That was a tipping-point moment for us, certainly,” Hershkovits shared, “People are still doing memes based on that image, so it really became iconic and put Paper on the map on a global scale at that point, and it really changed the game.”

But when Herskovits looks back on nearly half a century of Paper, some of his proudest moments include his coverage of cannabis as a major cultural disruptor. In 1993, Paper put out the “Pot is Hot” issue, which chronicled “the diverse constituencies — ‘rockers, rappers, Dead Heads, environmentalists and AIDS patients’ — fighting for marijuana to go mainstream and the changing role weed has played in our culture over time.”

“Hip-hop was coming up [in the early ’90s], and that was very openly supporting the cannabis world and culture, they would smoke on stage and just be way open about it in a way that most people hadn’t been comfortable with, and they didn’t care. There was also a moment in fashion where a lot of the brands started using imagery from cannabis. Jack Herer’s book The Emperor Wears No Clothes was starting to circulate around that time, and people were starting to have a new awareness of what was happening. In San Francisco, the first cannabis medical marijuana dispensary opened. So it was a really important moment in all of our lives when that happened.”

Looking back, Hershkovits is proud that he and the folks at Paper were willing to stick their necks out and make a statement about the new, rising pot culture, as well as the stigmatization and criminalization of cannabis. The influence of cannabis on culture and, in an era of slow-rolling decriminalization, the reverse of mainstream culture’s influence on cannabis, drives his work today as the host of Burb‘s Light Culture podcast.

“I was very comfortable in [the podcast] format, and I thought this could be a great way to extend the idea of what Burb is,” said Hershkovits in describing the origins of his collaboration with the brand, “because Burb feels that it’s important to be connected to the culture that we’re in. It’s not enough to just be a dispensary or a store that’s selling products. They want to support the culture.”

As cannabis culture and mainstream culture continue to integrate, Hershkovits feels strongly that the “magic and aura” of the plant, and the culture that co-evolved with it, continues to serve a disruptive purpose.

“When I talk about cultural disruption, it never comes from the corporate upper level. They’re happy with things as they are because it’s working for them. They’re running it their way, everything’s great. That’s partly what made it exciting for me, being able to point my finger at what I thought was going to be meaningful in the years to come. And a lot of people started to recognize that we knew what we were talking about, and it’s still in publication today, so there ya go.”

As a cannabis consumer, Hershkovits is still very much connected to flower smoking and joint-rolling experience.

“I’ve tried other things now that are available that are convenient sometimes. The oils and the edibles, they come in handy in different situations. But the flower to me is still really the best experience, it’s the full spectrum that is very hard for me to find elsewhere.”

Sour Diesel, a strain that came to prominence in New York in the ’90s, remains close to his heart.

“Sour Diesel became the big thing,” Herskovits said, “I’m actually learning a lot more about that now. It was a great, great time in New York. The ’90s blew up and cannabis was a big part of it.”

OG Kush is a recent favorite strain for Hershkovits, particularly for enhancing creativity.

“I like the sativas, something that’s more gonna give me ideas and stimulate, I’m not really looking to zonk out on the couch usually.”

No joint-roller is in their element without a proper grinder at their side. Hershkovits loves the Burb Grinder, “it’s a really beautiful object, and it’s a really great grinder that actually works.”

Hershkovits has fond memories associated with Burb’s 420 Waist Bag while checking out the local scene in Vancouver, Canada.

“When I was in Vancouver before lockdown, I met the guys who were making them, and they were so cool and really helped me understand Vancouver in a way that I hadn’t before. It’s such a great scene with so many important people doing great work.”

Though not a “cannabis product” in the traditional sense, there’s an inextricable link for Hershkovits between the acts of smoking weed and listening to music.

“Certainly music was an important factor of [trying cannabis in the ’60s], because everybody was into the music back then, and it really enhanced the experience of listening to music. You would go to someone’s house and you would play music and show off your latest records … As everyone is sitting around a circle smoking and talking, everything kind of falls away, all the prejudices, and you just sort of enjoy each other.”

Hershkovitz still loves to listen to music when he’s smoking, particularly to radio shows. “Kid Hops does a show on KEXP in Seattle called Positive Vibrations, which is a reggae mix of old and new, and it’s really opened me up to a whole bunch of new music that I wasn’t really aware of, and now I’m a regular listener.

He is also a fan of Jeremy Sole on KCRW in LA, and John Schaefer’s New Sounds on NPR.

“[Schaefer] plays a lot of somewhat avant-garde new music. It’s stuff that has a modern edge to it. Things that are ambient, of that nature, which I really like.”