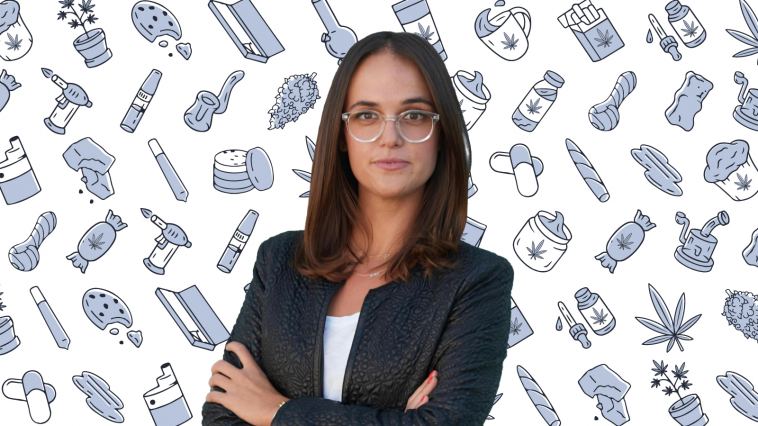 Though a longtime and passionate cannabis consumer with a keen eye for brand and an appetite for business, the idea of going into the business of weed wasn’t an immediate one for Connors. Her interest in people, how they think, and what motivates them initially drove her to want to be a therapist, but a love for art and a built-in awareness of emerging brands and consumer conversations eventually led her to a position in Brand Management at Pepsi in 2009.

In her five years at Pepsi, Connors had reached a level in the company that MBAs are accepted into, which made the thought of going back to business school seem counterintuitive. Still, she was itching for a change, and she couldn’t shake the feeling that her career would be bigger than her if she stayed on the Pepsi track.

So she switched gears and went to the Stanford Graduate School of Business in 2015.

“This was right about the time that I was like, ‘I think I’m gonna go into cannabis.’ In between my first and second year [at Stanford], I started diving [into cannabis] as a consumer. Someone was like, you can just get your card and go to dispensaries and buy weed, and my mind was blown. At the same time, my business mind started ticking. These brands are all sort of similar, and there’s a lot of black packaging, very masculine, potent, and I wanted a more accessible brand … It came together as not just my personal interest, but an advantage in business.”

Connors was part of a group of students who loved to smoke weed, but when she told them she was thinking of starting to work in cannabis professionally during a sesh, the initial reaction was something along the lines of “dude, you’re harshing the vibe here.” Doing research was also tricky at a school funded by federal money. But she persevered and eventually applied all of her business and design interests to what would subsequently become Besito.

“I think a lot of big corporations were turning to design then,” Connors explained. “This idea of human-led design thinking was also drilled into me at Stanford. The way great design can inspire innovation, new concepts, new brands, stuff you’ve never even thought of when you can really think creatively.”

Anyone in the cannabis industry is well aware of the eternal tension between the OG culture of lifers who took unimaginable risks to facilitate cannabis consumption before it was legal, and the new generation of venture-backed brands and businesses. For Connors, who didn’t come from money and, like many of us, had to go into debt to go to school, there was no other option but to raise venture capital.

“I was very lucky to find my first investor here who had already done several early, early cannabis deals, and believed in me and in what we were building,” said Connors. “Interestingly, our first round of investors in 2017 was a lot of international folks. Americans knew the state of cannabis here, and it was still too early and scary. Back in 2017, there was no institutional money, but I had a few institutional groups in 2019 come in. They were best in class consumer funds, and I was the first cannabis one next to their other investments in Warby Parker, etc.”

Today, she’s is still hyped on weed, and remains committed to honoring the communities that paved the way for the industry she occupies.

“I think the thing in this industry that always helps me keep it in perspective is, this was not as tough as the queer community in California that pushed for laws to help their friends dying, and it’s not as tough as hundreds and thousands of mostly Black and brown males sitting in jail for the same thing. I’m very aware of the history and the privilege it was for me to come in when I did. So I always try to use our platform to educate and make sure everyone knows the history of this plant and the advocates before us and what a privilege it is for even just a consumer to buy something. We’re all privileged.”

“I grow, so I mainly smoke my Gorilla Glue out of my garage in Venice. Just smoking a joint in the evening is my preferred method. I’m looking for that end-of-day wind-down but still be able to do some emails. I have a little porch and I go out there and roll and smoke, so it’s a ritual and that perfect end-of-day reset.”

“I love our pack of Minis on the go, especially rolling up to a group. ‘It’s so cute!’ is usually the reaction. People are like, ‘that’s the perfect amount!’ You can finish it in four big hits then you’re wonderfully high. Then for some of us, maybe I’ll have another one in 30 or 60 minutes. And there’s ten of them so it’s perfect. Everyone has their own, no sharing and no throwing away weed. That’s my party-on-the-go-one, I love to bring it to a beach or backyard moment.”

“Marigold has a Dip & Dust pre-roll that’s dipped in oil and rolled in kief. It’s so good. I like their one-gram and usually am sharing it at a moment that’s strictly focused on getting high.

“My sister and I shared one on 4/20 in her yard in San Francisco and it was perfect. We’re both heavy consumers, but this got us to the next level. We were giggling and our partners came back and we were like, ‘we can’t help you with dinner.’ Love that Dip’ n Dust for a special occasion.”

“I love the Sonder pop rocks. One of the Besito team’s favorite brands. Just a really sharp design, and an awesome, different point of view. And that’s what we’re all about. I’m so impressed with the innovation. Everyone likes a pop rock that gets you high. I love the idea of nostalgic products.”

“My favorite edible is Rose Los Angeles. They have a turkish delight, and it’s not your average gummy. Similar to turkish delight, less sweet, different sort of texture. They have a dope brand and do collabs with chefs and artists, very much cultural touchpoints that resonate with me. That’s the homework of a great brand. They’re speaking my language.”