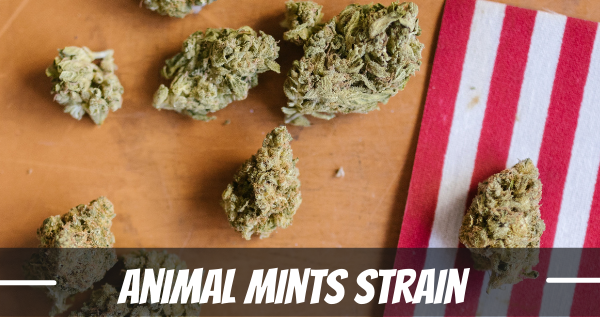 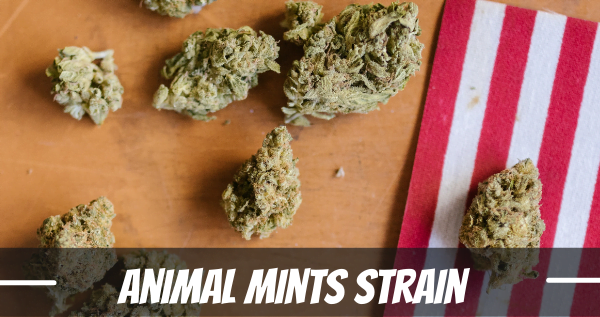 New and crazy names for cannabis strains are popping up faster than garage bands in the 90s (with just as equally crazy names).

Finding a strain that best suits your needs is getting even trickier. Well, fear not; ILGM can help.

Today on the menu, we have the flavorful  Animal Mints strain review to entice your senses.

Animal Mints strain info is somewhat shrouded in mystery. You’re likely to get alternating origin stories depending on who you ask.

On the one hand, the Animal Mints strain is described as a cross between Animal Cookies and SinMint strains and going by the name, that seems logical.

However, Seed Junky Genetics, based in Southern California, formulated theirs by taking a GSC (Girl Scout Cookies) and Blue Power mother and breeding it with Animal mints strain.

Finding seeds and clones will prove quite challenging, but it’s possible to get your hands on some buds, and the current Animal Mints strain price is around 200-300$ per ounce.

It’s clearly not cheap weed, and there are plenty of reasons for that.

When it comes to Animal Mints strain grow info, resources are extremely limited as it’s near impossible to buy seeds of this strain.

You’ll almost entirely have to rely on sourcing yourself a cutting.

Due to this, growing Animal Mints strain can be relatively difficult, especially if you have limited knowledge of rooting clones.

For the fortunate few that happen to grow some Animal Mints strain themselves, here’s some of what they can expect.

On average, this strain grows up to 60 inches high and can be grown indoors and outdoors.

Most growers recommend an indoor set-up as it gives you more control over your environment, and it’s much easier to monitor your growing conditions.

Amidst all the mystery and speculation, one thing is for sure:

Animal Mints strain is highly potent and should probably even come with a warning label for the low-tolerant smoker.

It’s most definitely not the kind of strain a newbie would want to play with and the type a veteran smoker knows to respect.

Clocking in at a whopping 30% and over, the Animal Mints has earned its position as a true cannabis contender.

There are a few factors to consider when finding the right type of strain for you, and often right at the top of the list is “what kind of high are you looking for?”.

If your goal is getting completely baked but still enjoying creative bursts with mad spells of the giggles, then Animal Mints strain effects are what you’re after.

Being a sativa/indica hybrid, Animal Mints strain delivers the best of both worlds.

Initially kicking in with euphoric and uplifting cerebral effects, it soon wanes into a calm, body numbing high, leaving you pleasantly sedated.

After a stressful day, this strain will get you completely unwound, ready to get involved in a creative passion project, or simply cuddle up to a movie with your loved one.

Animal Mints strain effects have made it a popular choice in easing constant pain and cramps and aiding in managing sleep and appetite disorders.

With Animal Mints strain THC percentage being in the low 30s range, many users experience high levels of euphoria, which assists in easing mental fatigue, anxiety, and even depression.

At first whiff, you could probably consider Animal Mints weed strain a dessert strain with its strong scent of mint and cookie dough.

Adding to that are subtle hints of pine and pecan, with strong diesel undertones.

It’s enough to entice any cannabis fan to welcome themselves to the smoke circle and enjoy a toke or two.

Sometimes strong mint flavor isn’t for everyone, as often the mint will overwhelm any other flavors or fragrances and leave you feeling like you just puffed on a menthol.

Animal Mints strain, however, is NOT that strain.

Animal Mint’s unique flavor is still like its fragrance, but the cookie dough and hints of earthy pine hold their own amongst the mintiness.

Rounding it off is a slightly peppery flavor on the tongue, and a welcoming flavor of diesel, especially on the exhale, tempting you to take just one more toke.

As most herb enthusiasts know, you’re bound to experience a couple of common reactions after smoking pot.

From dry eyes to dry throat and all sorts of munchies in between, these effects have become synonymous with cannabis consumption and, thankfully, are pretty easy to combat.

You’re good to go with a pre-emptive snack, a prepared drink, and some eye drops on the side.

However, Animal Mints is not some run-of-the-mill ditch-weed you scored from your sister’s boyfriend that one time you ran dry.

It’s intensely potent and not to be taken lightly.

Novice or casual smokers should exercise caution and consideration when smoking Animal Mints strain, as its effects kick in very quickly.

“If it’s so easy, everyone would be doing it” is a common statement, and it certainly applies here.

Everyone wants to grow grade-A weed, but it’s not that easy. This is especially true when information is limited, as Animal Mints Strain grow info is.

With Animal Mints strain seeds unavailable to purchase, your only other option is finding a clone, which brings its own challenges.

If you do find the means to grow your own, you can expect to yield dense olive green nugs that are fluffy in appearance and rich in trichomes.

It’s best to start indoors; that way, you can monitor the temperatures and grow conditions, resulting in better yields.

Learn to grow like you know what you are doing in my Marijuana Grow Bible.

When it comes to the Animal Mints strain flowering and harvesting times, the information we could source suggested a flowering time of 8 to 10 weeks indoors and harvest time around mid-October outdoors.

The origins of the Animal Mints are certainly hazy, and the lack of accessibility to seeds doesn’t make it much easier to deduce.

Either way, whichever one happens to be true, you’d still want to smoke it when you smell it.

Simply put, it’s both. Animal Mints is a balanced hybrid strain, meaning it is 50% sativa and 50% indica.

What is Animal Mints Strain yield?

The growing information on Animal Mints strain is limited due to the unavailability of seeds; however, an estimate of what one can expect is 0.5 – 1 oz/ft² indoors and 10 – 15 oz/plant outdoors if you’re lucky.