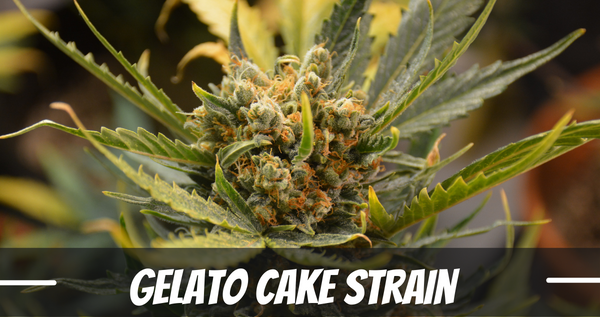 The facts about the origins of the Gelato Cake strain (sometimes called “ice cream cake”) are a bit hazy. Some say

Seed Junky Genetics are the original breeders, but we can’t confirm that. What we do know, though, is that Gelato Cake weed strain is extremely flavorful and quite popular.

This indica-dominant strain stems from a lineage of legends, with its parent strains being the well-known Gelato #33 and the ever-loved Wedding Cake strain.

Gelato Cake THC levels can vary from 18% to a mind-bending 25% prompting newcomers to smoke with caution.

Delivering an all-around hybrid high that starts with a cerebral rush before subsiding into the relaxing body-high that indica strains are known for.

Once smoked, there is little debate whether Gelato Cake strain is sativa or indica.

This indica-dominant strain (75% indica to 35%) is a great nighttime strain for unwinding after a long day and relaxing into an evening of movies and snacks.

As mentioned earlier, the origins are unknown, although thankfully, seeds are available online if you would like to cultivate this strain yourself.

The ever-growing popularity of this strain can be accredited to the heavy-hitter genes that make up Gelato Cake genetics.

Both its parent strains are legends in their own right that have built up quite a name for themselves within the industry.

Gauging by the Gelato Cake strain reviews, many people tend to hold it in the same regard.

Gelato Cakes genes include the Wedding Cake strain, which may very well be one of the most potent strains around.

The other parent strain is Gelato #33, a fairly balanced hybrid resulting from the merging of Sunset Sherbet and Thin Mint GSC.

Gelato Cake weed seems to have inherited the best from its parents and is quickly carving a legacy of its own.

As with all cannabis strains, your success often correlates with the level of care and attention given.

Gelato Cake marijuana strain is no different, and a little cultivation knowledge can go a long way.

It’s said to be a plant with an easy to moderate growability rating, allowing even novice growers to give it a shot, whether they prefer to grow indoors or out.

The dense nuggets this strain produces have a rich, dark green complexion with a frosted coating of glistening trichomes.

A light purple hue may also contribute to this plant’s vivid coloring and lend even more so to its appeal.

Due to the resinous nature of this plant, you’ll want adequate ventilation and airflow to prevent mildew or bud rot.

Head to https://ilgm.com/growing for all the growing tips and tricks you may require.

So if you’re planning to grow outdoors, be sure that your climate suits your strain.

There isn’t a lot of Gelato Cake strain info regarding growing and yields; however, we know that the average flowering time for Gelato Cake weed strain is around 8 – 9 weeks.

Whereas Indica dominant plants may not make the largest trees, they make up for that with quality over quantity.

With enough care and attention throughout the season, Gelato Cake strain growers can expect an average of 1 to 1.6 Ounces per square foot

With a parent strain like Wedding Cake, you know Gelato Cake strain effects are nothing to play with and may even leave the most experienced user counting sheep on the couch.

Gelato Cake strain comes on fast and hits you with a sudden wave of cerebral euphoria, quickly elevating your mood and bringing on a sense of happiness and zest.

This is, however, shortly followed by a sweep of relaxation and a sense of calm flowing through your body.

Many people have turned to Gelato Strain to combat symptoms of depression, insomnia, anxiety, and even chronic pain and cramps.

This strain can help clear your mind and put you in a state of ease, and it is perfect for a calm night in.

But do not overdo it, as this strain can quickly send you into a tug-of-war between couch-lock and the munchies.

The ever-common redeyes, cottonmouth, and mild thirst are to be expected.

Overindulgence may lead to feelings of anxiety or paranoia, especially in more novice users.

Gelato Cake’s taste and smell are certainly unique, displaying a peculiar mix of pepper and pine with berries and vanilla.

Its overall aroma is sweet and fresh, with prominent citrus elements, although it’s not without that dankness we’ve all come to love.

The sweet flavor of this strain is full-bodied and creamy, with a citrusy vanilla taking center stage. With the exhale, the hint of pepper and gas is most clear.

The prominent terpenes within this strain are the culprits behind these delicious flavors and aromas, with Limonene being one of the most dominant.

Limonene lifts moods and contributes to the citrus flavor, while Linalool, the other leading terp in this strain, lends its floral flavor and calming properties.

What color is the Gelato Cake strain?

If proper cultivation and curing methods are followed, Gelato Cake strain can result in a dark green color with a light purple hue and a generous sprinkling of amber pistils and crystal trichomes.

Where does Gelato Cake derive its name?