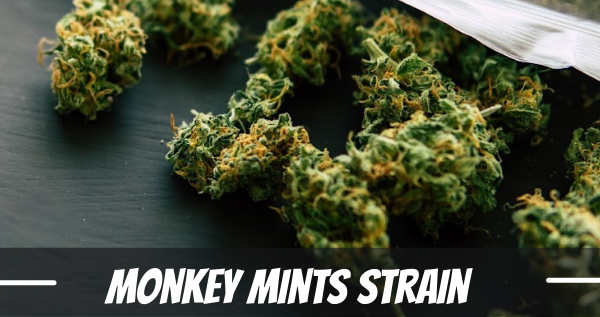 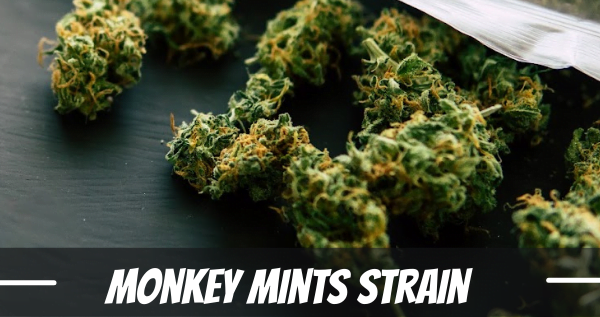 As long as the creative minds at Exotic Genetics continue to create, we will likely never be in short supply of epic weed strains.

Once again, this Tacoma, Washington-based enterprise has delivered by merging two of their world-renowned strains, spawning the one-of-a-kind Monkey Mints.

Monkey Mints is a heavily THC dominant hybrid strain, balancing the scales at a sweet 50/50 indica to sativa ratio.

That’s not to say it doesn’t hold its own when it comes to therapeutic benefits.

We’ve still got a whole Monkey Mints strain review to unpack, so let’s stack this bowl and rip into it.

With parent strains like Grease Monkey and Mint Chocolate Chip, it’s no wonder the Monkey Mints strain turned out the way that it did.

It’s loud, in your face, and holds no punches, often serving as high as 20% THC levels.

It inherited its potency from its “dad,” considering Grease Monkey is well known for producing levels as high as 30%.

Monkey Mints is undeniably strong, but that’s not all it has going for it.

It graciously inherited much of its dynamic flavor and nurturing nature from its other parent strain, making it a memorable smoke from the first hit.

You can feel its effects from the moment you exhale, starting with a slight tingle vibrating through your lips and body, followed by a welcomed head-high.

Feelings of happiness and euphoria can be expected, and possibly “the giggles.” An unexpected mood shift lifts the soul and spurs a desire to get into some deep conversations.

Don’t get too comfy, though. If you happen to be on the couch when the body-stone hits, you may be there for a while.

Monkey Mints effects are great for when you want a little pick-me-up before heading out for your day.

However, if you have too much, you’ll be too stoned to leave the house. Use it with consideration –  especially if you are a newbie.

On the other hand, users have commended this strain for providing relief from a wide range of ailments, including chronic pain, muscle tension, inflammation, nausea, and even glaucoma.

In addition to physical comfort, many have credited its mood-elevating properties with aiding in depression, anxiety, and stress.

This strain doesn’t play around when it comes to aroma, so if you intend to take some Monkey mints with you on the town and still want to keep it on the down-low, we would suggest double bagging it or using a sealable container.

It’s got a divine yet pungent, skunky fragrance (thanks to its Caryophyllene terpene) with strong fuel hints and an obvious mint scent.

It’s not all obnoxious, though, as there are subtle earthy spice undertones mixed in to round it off.

Living up to its namesake, the prime ingredient in Monkey Mint’s is a strong minty flavor with a herbal and spicy taste, especially on the exhale.

It goes down smooth, making for a highly favorable and flavorful smoke that leaves you wanting just a little more.

As far as adverse reactions to the Monkey Mints strain, don’t worry about this strain making you go ape.

You won’t be pounding your chest and flinging poop, though you can expect the usual suspects: dry mouth, munchies, and red eyes.

Some people have paranoia and slurred words, though this tends to happen after smoking quite a bit.

Its THC content is powerful, so those new to smoking or with a low tolerance should consume mindfully.

If you enjoy growing herb as much as I do, Monkey Mints is a wonderful strain to try.

Monkey Mints strain info is abundant online, and from what the consensus says, it’s considered relatively easy to grow.

It thrives both indoors and outdoors and is a heavy yield producer.

Your plants should grow to a height average of 30-60 inches, with forest green foliage marked with subtle purple hues.

The nuggets are bright green and fluffy popcorn shaped, with a purple tint and covered in a frosting of trichome crystals.

Nothing is better than harvest day. The smell of freshly trimmed buds in the air and that sticky feeling on your fingertips lend to the anticipation of a yield worth waiting for, and Monkey Mints provides generous yields.

You can expect a flowering time of around 52 – 60 days and harvesting time about a week later. Outdoors you can expect as much at 15 oz/plant. Indoors it’s around 1 oz/ft².

Is Monkey Mints sativa or indica?

Monkey Mints is neither… Or both. It’s what you’d call a hybrid strain, consisting of both sativa and indica. This particular strain is a balanced hybrid meaning its 50% indica and 50% sativa, providing a little bit of what both strains have to offer.

Does Monkey Mints strain have a high THC content?

Monkey Mints contains an average of 15-20% THC. That could be classed as mid-level strength, as some strains can reach levels of 30%. However, that’s not to say that it isn’t potent; this strain will seriously knock you to the floor if you don’t use it mindfully.

What is the best time of day to enjoy Monkey Mints?

It depends on how much you consume. In small amounts, it’s a great morning strain. In larger amounts, it’s perfect for an evening wind down.