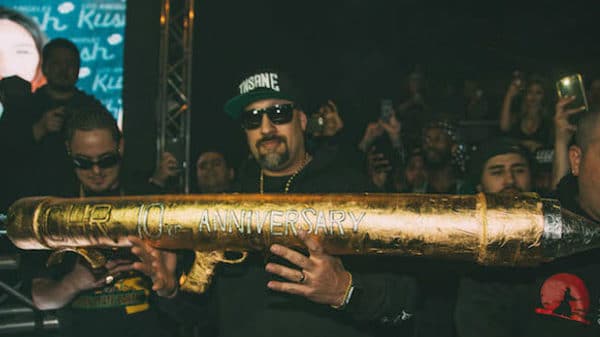 Prior to 2017, the world’s largest joint was this watermelon joint that was rolled for 4/20 in 2016 by Tom Freehand, famous for his giant joints. This joint was rolled for New England’s first annual Harvest Cup, which took place December of last year. The joint was 100 feet long, making it 30 feet taller than the White House. The giant joint took 100 hours to assemble and was revealed at exactly 4:20 local time. How big will the next record setting joint be?

Tip: make sure to download my free Grow Bible for more information

Most Joints Ever Smoked By One Person

The current weed world record for most joints smoked by a single person belongs to Irvin Rosenfeld who smoked over 115,000 joints. The record was actually recorded in the Guiness Book of World Records in 2014 and still has yet to be broken. It’s not hard to imagine why; 115,000 joints is a lot of joints for one person to smoke!

Dab Stars knows a lot of things, especially when it comes to dabs. So, there’s no surprise there that they would be the ones to break the world record for world’s largest dab. They had the previous record for 90 grams, which they topped in 2015 by smoking a dab that amounted to 400 grams!

The world record for strongest sativa is currently held by Ghost Train Haze, which carries a potency of 25 percent THC, the highest of any entry in any Cannabis Cup. Before you think you can start growing it on your own, you should know that the growers are very secretive regarding the strain’s genetics. If you had one of the strongest strains of weed in the world, wouldn’t you keep it under wraps?

Not to be confused with the largest joint, the world record for the world’s largest blunt was broken last year in LA. The so called “bazooka blunt” was designed to look like a rocket launcher and weighed in at a whopping 5 pounds! The bazooka blunt was significantly larger than the previous record, which only weighed in at 0.8 pounds.

Ever wondered how big your grow could get? As it turns out, by quite a lot. Park Lane Farms in Ontario Canada is 350,000, and houses more than 17 different strains of dank and delicious buds. They happen to hold the current world record. The thing about records is that they can be broken. Will you be the one to beat them? Better get growing!

Did we miss any other weed world records? Tell us in the comments below!

Read These Weed World Records are Amazing! on I Love Growing Marijuana.

These Weed World Records are Amazing! originally appeared on ILoveGrowingMarijuana.com