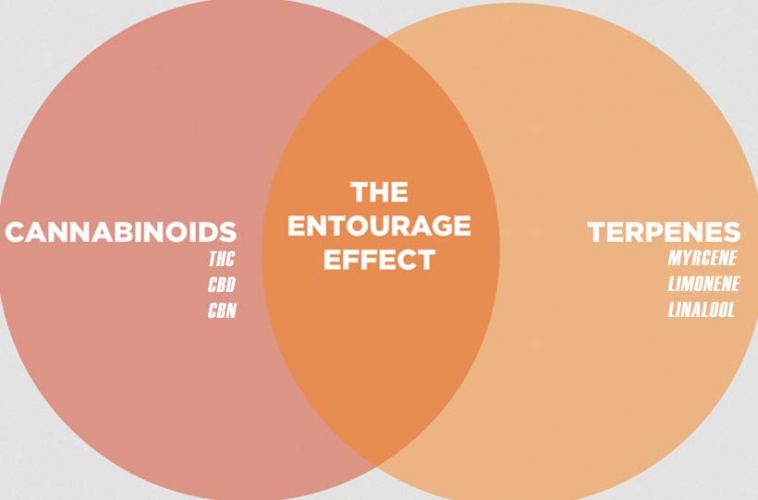 If anyone hears the word “cannabis,” the first thing that comes to their mind might be “euphoria.” And if the list goes on, then the next in the line would be— cannabinoids, preferably THC and CBD. Right? But did you know that there is more to cannabis than just cannabinoids?

Yes! You heard it right.

Cannabis contains a lot of other components besides cannabinoids, such as terpenes, flavonoids, and others. And if you combine the potency of all these elements, the potential impact of the herb rises considerably.

Those who are scratching their heads as to how that’s possible must be familiar with a famous phrase, “Unity is strength,” or “two heads are better than one.” Similarly, when cannabis is taken as a whole, the synergy or popularly referred to as the “entourage effect,” improves the medicinal capacity of the plant to multiple folds.

But what are the benefits? Let’s find out now!

Many people think that consuming cannabis will always leave them in a couch-locked state. Little did they know that if you use cannabis that contains CBD and THC together, the positive effects multiply, and the adverse effects of THC are taken care of.

In the same way, terpenes present in the cannabis drive the therapeutic effects of the plant by nullifying the side effects to minimal. According to the scientists, the entourage effect is the result of two primary phenomena.

This is why the whole plant is generally considered the best option. You can look for various other benefits of cannabis in this marijuana blog and include cannabis into your life for a healthy ending.

What Does Research Say?

A Sciencedirect study on breast cancer found that when cannabis THC was used as an isolate, it could reduce the growth of cells and tumor cells. However, when THC was combined with cannabigerol (CBG), the results were the same but with 20% less dosage.

Simply put, in times when the world is so obsessed with CBD isolates, CBD dabs, hemp products, choosing full spectrum products is ideally the right choice. Why? Because the entourage effects allow the components of cannabis to work better and produce better medicinal effects.

Cannabis is still somewhat of a mystery plant, with research still going to decode its multitude of benefits. The exciting thing is that it’s not only THC or CBD. Even terpenes show better medicinal effects. For instance, Limonene helps in elevating mood, Nerodiol improves the effectiveness of other compounds, Linalool helps people with its anticonvulsant activity.

In short, cannabis is a great tool to include health and wellness in your life. However, it’s beneficial to talk to a medical marijuana doctor to understand its full potential for managing your condition. If you are using it for recreational purposes by any chance, it’s better to keep in mind the guidelines laid down by your state. That way, you will avoid any legal hassles w.r.t marijuana consumption.

So, what are you waiting for, grab your cannabis strain and manage your wellness right away!