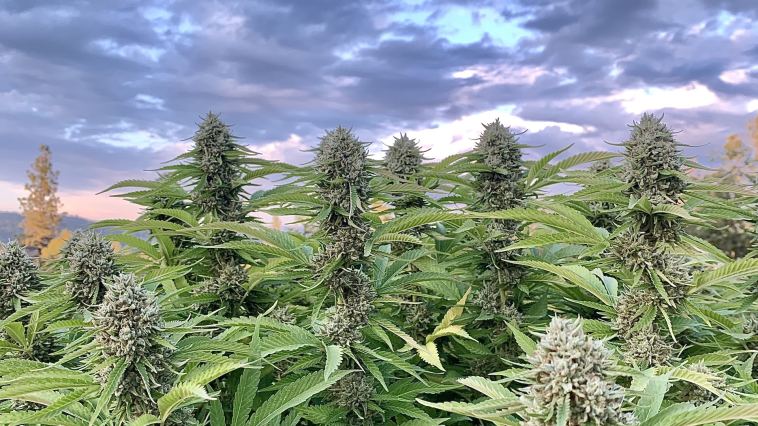 America’s millions of cannabis lovers, get ready for an overflowing cornucopia of chronic.

As you read this, the nation’s world-class ganja farmers have thousands of metric tons of outdoor-grown pot air-drying in cool, darkened rooms. Thousands of sun-grown varieties will boggle dispensary shoppers’ minds this fall and into 2022.

So what are the quintessential, 11 best cannabis cultivars of the 2021 harvest? The trendsetters and exemplars? Who are the Most Valuable Players in this $18.3 billion legal industry? What flavors did outdoor and greenhouse farmers grow tons of because the people demand them?

Here’s the best of the harvest, destined for your bubblers by Danksgiving. Look for these 11 strains and their close cousins for that undeniable fire in your life.

Strains highlighted in this article:

The soft, sweet vanilla smell; the rich, fragrant smoke melting into notes of dank gas—Ice Cream Cake runs high in THC yet won’t give you The Fear.

It stands on the shoulders of giants: Wedding Cake crossed with Gelato #33, bred by the #1 in the game, Seed Junky Genetics.

ICC took a 2019 Emerald Cup in the greenhouse category and this crowd fave grows well indoors or out. Its bag appeal, nose appeal, and versatility make it the number three most searched strain on Leafly in 2021 in the US.

It’s also very, ahem, re-nameable, said Hendricks, in Humboldt. “I don’t think it all goes onto the market as ‘Ice Cream Cake.’”

The heads have spoken. They like their Cookies strains minty and heavy-hitting for that red-eyed nighttime munchie sesh.

This elite cross of Animal Mints and Bubba Kush has spent the last 18 months clawing into the top 25 strains in the US on Leafly.

First bred indoors by Seed Junky Genetics of LA, Kush Mints now cavorts outdoors in the fields, getting it on with other top strains, resulting in big crosses like Gush Mints. Sploosh.

“Seed Junky killed it with this one,” Hackett said.

Leafly gave the Zkittlez and Gelato cross the Strain of the Year title in 2020, so farmers tripled down in 2021. Dive into them all this fall, including Exotic Genetix’s Tropic Runtz, which crosses Runtz with Tropic Truffles (Tropicana Cookies x Mint Chocolate Chip).

“[Tropic Runtz] has one of the most insane, mind-numbing citrus aromas I’ve ever smelled on cannabis,” said Ben Caldwell, cultivation director for F5 Farms in Tulsa, OK, where cannabis exploded this year.

Modified Grapes and other GMOs

This year’s a banner year for the savory cannabis movement led by GMO (aka Garlic Cookies), but also includes funky Breaths like Peanut Butter Breath.

Keep an eye on all the GMO crosses this harvest season—they dump hash and are very pungent and strong.

The power players at Symbiotic Genetics added Purple Punch to GMO to get Modified Grapes, which is just starting to take off among outdoor growers. Coastal Sun Farm of Santa Cruz grew a grip of it.

“There’s a lot of eyeballs on it. My guys are saying, ‘When are we getting that Modified Grapes in the library?’” said Hendricks.

Grill something adventurous and pair it with this indica hybrid. Just remember to turn the burners off.

Every harvest season needs an OG Kush cross. This year—marshmallow. Why not?

It smells OG yet marshmallowy, and comes from a prestigious mix of Chemdog D, Triangle Kush, and Jet Fuel Gelato. OG lovers love it.

Hunted by HendRx Nursery and tissue-cultured by Node Labs, Marshmallow OG is in production nationwide—ready for your after-work, indica-hybrid, kick-back sesh.

This hybrid is eminently wake-and-bakeable. And the thick, tropical flavors from Mimosa and family make fantastic hash.

“Booney is so dope,” said Hendricks. “He moves from planet to planet, I think. His feet never touch the ground.”

Flabbergasted by these newfangled weeds? Get back to the root of the fruit with a Sour Tangie.

Sour Tangie’s classic rowdiness can go toe-to-toe with any of the new kind on the block. In April 2021, Redwood Remedies received an Emerald Cup in the 2020 greenhouse category.

“Sour Tangie is a badass,” Hendricks agrees. “That’s a staple—it’s not going anywhere.”

This strain smells super sour and citrusy with a big, dank bottom. It gets us daytime lit—not racy or sweaty, just lifted and engaged. It’s a good afternoon party smoke.

Where my weird sativa heads at? You know, the folks who hate the dessert strain craze? The ones pining for fjords full of old school Thai landraces?

Strap in for a religious encounter—Mass Medical Seeds’ Prayer Pupil is reaching to the sky, coast to coast.

Let’s start with the reputation of its parents: Star Pupil and Prayer Tower.

Are you sweaty and trippin’ yet? You will be when you hit this 30% THC, soapy, hashy, creamy, lavender-tasting bud.

“It can be a bit intense, fluttering or racing at first but settles down into more of a euphoric feeling,” said Matt Armbruster, cultivator at Common Roots Cannabis in Washington.

Let’s plant the flag—Hella Jelly is the next game-changing sativa hybrid.

The potent, deliciously sweet, and energetic cross of Very Cherry and Notorious THC is one season old, but the data is rock solid.

Hella Jelly will be selling out in dispensaries through at least 2023, Hendricks said.

“So many people are testing it and loving it. We love it—it’s very unique. It’s totally different in a way that fits into a big, heavy, mega-producing facility,” he said.

We grew it and concur. Helly Jelly from feminized seeds is vigorous and yields ample, frosty, resinous green nuggets that electrify the air with notes of blue cotton candy, strawberry, and grapes. It tests notoriously high in THC to boot—like, sweep your kitchen at 11:30pm, high.

“We’re ecstatic that Leafly loves it,” said Nathaniel Pennington, founder at Humboldt Seed Co. “It’s definitely a strain that has a major presence this year.”

Why get your CBD from randoms on the internet when you can get it from world-class weed growers? Ditch the truck stop CBD for a terpene-rich, top-tier type 2 strain this harvest.

Our money is on Pennywise, a tasty, award-winning 1:1 CBD:THC cultivar from Subcool /TGA Genetics. Subcool lost his genetics in a fire in Santa Rosa, CA, and then died in 2020. His life’s work lives on in the piney, sweet, dank, lemony, woody, peppery, and floral bud, with its calming, mood-improving ability.

A cross of Harlequin and Jack the Ripper, Pennywise has taken root across elite North American gardens. Artisanal sun-growers Esensia Gardens of Humboldt, CA won 2nd place in CBD flower in the 2021 Emerald Cup with their local line of it.

“That Pennywise is rad,” said Hendricks.

Scoop up some near you. Then go do some ganja yoga.

Sometimes you need to go down for the count. You may need a MAC cross.

Breeder Capulator created MAC (Miracle Alien Cookies) for indoor gardens, but fresh crosses of MAC built for outside just chunked out in the fields this year.

MAC Tyson goes great with some weekend retro gaming on SNES. Boot up all the MAC crosses this fall.

And that’s the 11 best strains of the 2021 harvest. Big thanks to all the ganja farmers big and small!

Keep the celebration going—shout out your favorite harvest strains and growers in the comments below.

11 best cannabis strains of the 2021 harvest originally appeared on Leafly.com