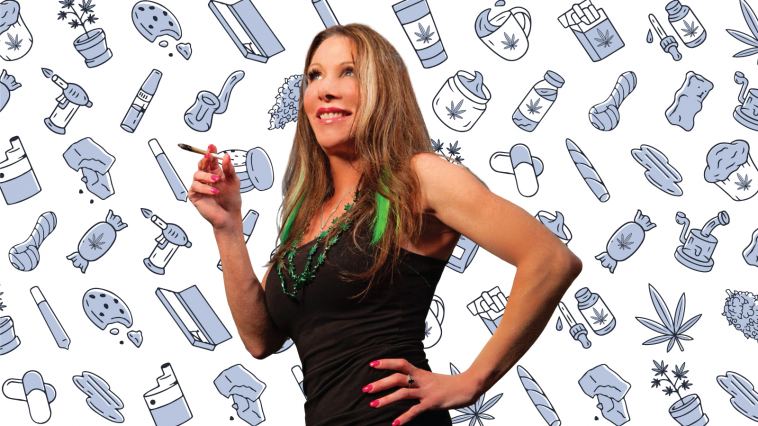 When it comes to weed history, MzJill is definitely one of the pioneers that helped birth this thriving legal industry. Owner of MzJill Genetics, and co-founder of the world famous TGA Genetics, she’s been breeding some of our favorite weed strains for over 25 years. Jill’s been here since the days of hiding plants in bushes and having to be hush-hush on helping medical patients, and she’s still here in the days of big corporate cannabis and the cultural changes that come with it.

“25 years ago, everything was founded for a handshake, we were more out for each other. It wasn’t so cut-throat, there was an unspoken word of loyalty. Now, as we move into the legal market, I do see an influx of people who are not necessarily about the plant or the patient. But I am grateful that medicine is more readily available to patients,” said the seed breeding legend.

The mother of Jilly Bean is an old school grower from the forum days of OverGrow.com. You’re probably most familiar with TGA Genetics and her partnering with the late Subcool (TGA Subcool Seeds/TGA Genetics/The Dank). Her first real plant that she ever grew was a Cinderella 99 BX (backcross), and she and Sub blessed the world with famous strains like Agent Orange, Space Queen, and Vortex.

“Agent Orange was one of the first ones that Sub and I did together. I used his Jack The Ripper and my Orange Velvet mother. It was named to honor my father. He was a Vietnam veteran, and he ended up contracting cancer from the chemical Agent Orange. I named the strain Agent Orange as a shoutout to my father and all of the Vietnam vets.”

Now, in modern times, MzJill still puts out her legendary product through MzJillGenetics. They are available on her website, and through sites like Seeds Here Now and Breeder’s Direct Seed Co. She’s running an entire line of Jilly Bean hybrids, and she’s also bringing all of their original TGA strains under the original logo. Querkle, The Flav, and Jilly Bean have already been released. Next up is Agent Orange, some F2s, and an entire line of Agent Orange hybrids.

Past breeding and growing, MzJill is a daily consumer and long-time medical cannabis patient. “I have scoliosis, so it definitely helps with my back and hip pain. I’ve had several children, I have the [Ehlers-Danlos syndrome]. The Jilly Bean is most amazing for helping women with PMS symptoms. Most pains that involve female organs, it has been very beneficial.”

These are five weed products that legendary breeder MzJill can’t live without.

It’s bong over everything with MzJill. Sometimes she’ll smoke from a pipe or roll a joint, but the bong is 100% her favorite delivery system.

On her daily consumption habits, she told Weedmaps, “I would say I smoke between an eighth and a quarter per day. I love to smoke a few bong hits before I head to the gym, it gives me a much better workout. Some days, if my morning’s starting off a little rough, I may feel like I need to take a few hits before I start the day to set the mood right.”

Jill is primarily a flower smoker. Organic flower, to be specific. Not wanting to be biased towards her own strains, she said, “One of my very favorite [strains] is Dog Walker. Absolutely love the funk of that one. Very unique smell and flavor. And I’d say Triangle Kush is one of my favorites.” And, as mentioned above, she loves her Jilly Bean.

“I definitely like to have my rolling papers and my grinder so I can roll a J when I’m out and about.”

MzJill uses her own brand of MzJill Logo Rolling Papers. The pack comes with 32 papers and crutches.

In addition to flower, there are a plethora of topicals that MzJill enjoys. She definitely enjoys slathering on Kush Creams topicals.

MzJill’s absolute favorite topical is the Embrace lotion from Colorado’s Eureka Effects. She swears by their catalog. “They actually have the full-spectrum CBD. They’re based in Colorado. They have sprays, they have lotions, they have tinctures, they have all kinds of products. They have some available for pets, as well, and have the CBD I found to be really good for my dog. [Toke]’s getting older, and he has some joint issues. The CBD helps him rest more comfortably.”