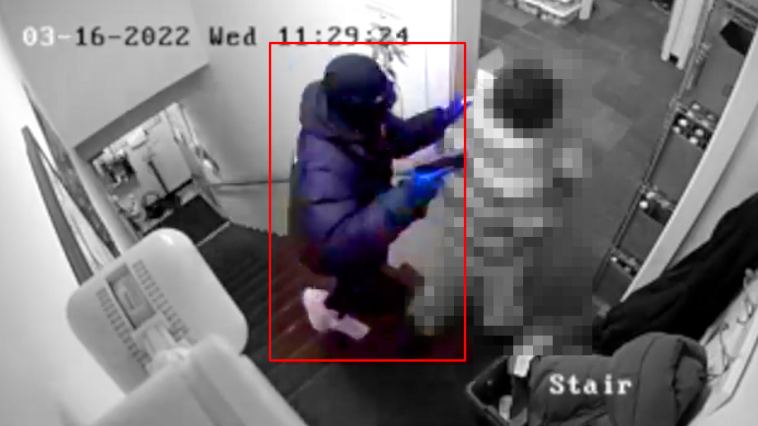 On Tuesday March 15th, 2022 the cannabis dispensary I work at was robbed, again.

This time it happened just before 5:30 in the evening. The sun was shining. The ground was a bit wet from a recent rain—a typical spring day in the Pacific Northwest.

Then two gloved, hooded masked men entered through the front door. “Everyone get on the floor!” they shouted. “This is a robbery.”

I had been scheduled to work that day, but had to take a personal day to deal with a family matter. I escaped the trauma of the robbery based on nothing but dumb luck. But I see and understand the terror my co-workers went through—the whole incident was captured on store video—and I see their ongoing struggle to cope with both the past trauma and the fear of it happening again. Maybe that’s why I’m compelled to write about it.

From the video and the memory of my co-workers, this is how it happened. And continues to happen.

A store invasion with deadly weapons

Shortly after ordering everyone on the ground, one of the assailants fired a shot into the ceiling, cementing that his reign of terror had begun.

One perpetrator grabbed our store manager, put a gun to his head, and demanded he empty the tills into a garbage bag. After the money was secured and handed over—and with the gun still being wielded near his head—the manager was forced to the ground.

Cash in hand, the two armed men ran toward the front doors and exited the building.

Our store has installed robbery panic buttons, just like banks. When you can’t use a bank, you become a bank.

Inside, staff members and customers slowly rose from the floor. One of my co-workers had pressed one of the store’s panic buttons during the assault, which alerted local police to the situation.

One of our customers attempted to trail the gunmen to gather descriptive information about their vehicle. Four squad cars arrived within minutes of the getaway to secure the scene. By 5:38, rolled security gates had been pulled down and the store was closed for the day.

The store owner arrived shortly after the police. They talked with the cops as our staff members made their way home. The three suspects remained at large. A little more than five hours later they burst into another cannabis store about six blocks away and carried out another strong-arm robbery.

Our second armed robbery this year

This was the second armed attack at my store in just over a month. Same store, same staff, same trauma.

On March 16, the morning following the attack on my store, two armed men—we’re not sure if it was the same team—robbed a cannabis store in Bellevue, about 25 miles away from my store. After a lengthy police chase, which included a tire literally falling off the getaway vehicle and the suspects fleeing on foot, that attack ended with two of the men in custody and a third man dead after an exchange of gunfire with police in a Seattle neighborhood.

In the past two months, employees and customers at more than 70 licensed cannabis stores have been robbed at gunpoint in Washington state. The numbers keep spinning upward. Three armed robberies happened in a single day on March 10, and again this past Tuesday, March 15.

Few state and law force officials seem to care about this threat to our lives and our livelihood (and their tax revenue), so Ian Eisenberg, owner of the Uncle Ike’s stores, now keeps a public spreadsheet tracking the crime spree. So many robberies are happening right now that he has to update it daily.

‘Cash only’ means cash on hand

What’s behind the crime? Cash money.

Federal prohibition continues to prevent most banks from offering services to state-licensed, tax-paying cannabis companies. Visa, MasterCard, and American Express refuse to allow their cards to be used at cannabis stores. The result: Every customer pays in cash with the exception of a few stores that offer ATM transactions at the register. And even those ATM workarounds are problematic; Visa is now trying to force stores to stop the practice.

The inability to accept credit cards leaves my co-workers lying on the ground while masked gunmen rob the till.

The next time you hear about the cannabis industry’s “banking woes,” you should know it’s not an issue that just burdens the accounting staff. The inability to accept credit cards leaves my co-workers lying on the ground while masked gunmen take advantage of these cash-heavy businesses.

Adding fuel to the fire is the current spiritless attitude of local police, administrative departments, and political leaders, who refuse to engage on any meaningful level to change policy in ways that would better protect the lives of our customers and employees.

State to stores: Learn to be a good victim

State officials are aware of the problem. In late January, the state Liquor and Cannabis Board sent an advisory bulletin to licensed stores offering “safety suggestions retailers can consider to help keep themselves and their employees safe.”

● Train employees to be good witnesses

Yes, they actually advised us to train to be better witnesses. In other words: Learn to be a good victim.

State to stores: Thanks for the $560 million last year

In Washington, the state loves to collect massive amounts of cannabis tax revenue while treating cannabis dispensaries as criminal enterprises. Licensed cannabis companies operate under incredibly strict and onerous regulations. One mistake can result in heavy fines and other penalties, including license suspensions and permanent closure.

Washington’s licensed cannabis industry sends over half a billion dollars directly to the state every year—and yet the state seems unwilling to participate or help in the protection of our industry.

On March 17, after months of armed dispensary robberies passed with little action, Washington State Treasurer Mike Pellicciotti finally stepped up his office’s lobbying efforts to pass the SAFE Banking Act through Congress. If passed, that bill would allow federally regulated banks to open accounts and accept money from state-legal cannabis enterprises. The bill would finally allow us to accept credit cards, just like every other business.

While the SAFE Banking Act would help, the bill has languished in Congress for years. Advocates have long warned that forcing licensed cannabis companies to act as cash-only businesses puts public safety at risk. Those dire predictions have now come true. Real harm is happening.

Other states hit by armed takeovers too

Washington isn’t the only state hit hard by this crime spree. In a New York Times story published just hours before my store was robbed, a reporter noted that cannabis stores in Oakland, California, now employ security guards outfitted like military commandos. “It’s crazy to think we need all this war stuff to protect our business,” one store owner told the Times. “But that’s where we are today.”

With so many robberies left unsolved I am left wondering: What are our local leaders doing to protect us? Why are so many cannabis stores falling through the cracks of civil protection?

In Washington state, every dollar spent on cannabis products is subject to a 37% excise tax in addition to a 10% sales tax. Nearly half the money from every purchase goes directly to the state. In the 2021 fiscal year alone, the Washington State Department of Revenue collected $559.5 million in cannabis tax revenue and licensing fees.

Regulated, taxed, but not protected

Since Nov. 2021, there have been more than 100 reported armed robberies. Some stores, like mine, have been victimized more than once. Retailers, producers, and processors are being left to fend for themselves. We’re left to hire our own security guards, track our own crime data, and offer our own rewards for information leading to the capture of these criminals.

Where is the outrage? Where is the swift action to defend our state-licensed, tax-paying, and law-abiding industry? When and where will the next bullet land?

My store was robbed on Tuesday. We’re still recovering from the trauma originally appeared on Leafly.com