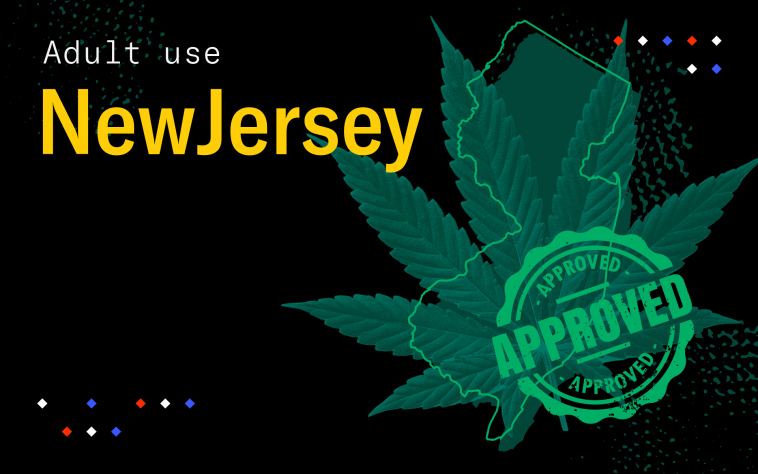 Garden State voters have legalized recreational cannabis via Question 1, becoming the first state in the mid-Atlantic region to pass such a measure.

As anticipated, the ballot question sailed through easily: 67% of residents supported it at the polls.

Question 1 was an amendment to the state constitution, and it takes effect on Jan. 1, 2021.

Find legal dispensaries near you in New Jersey

When can I legally possess and consume cannabis?

How much weed can I possess?

That’s a mystery the state Legislature will have to clear up.

The language of Question 1 provides few details on the adult-use program itself. The program is now in the hands of first the Legislature and then the state’s Cannabis Regulatory Committee (CRC)—which already exists to run the state’s medical program—to lay out a framework and regulations.

Some lawmakers, however, are optimistic that the program could launch very quickly.

“I think one of the most important things is to allow people to buy legal cannabis immediately,” state Senate Judiciary Committee Chairman Nick Scutari (D-Union) told NJ.com on October 27.

More recently, Scutari told Politico that he’s already drafting detail-rich legislation that will be filed “hopefully by the end of the week, Thursday or next Monday.”

When can I buy legal marijuana?

See above: It’s up to Nick Scutari and the state Legislature. We’ll know more in a few days or weeks.

Will cannabis be taxed?

Hey, this one we can actually answer!

The amendment prohibits a specific marijuana excise tax. The sale of adult-use cannabis would be subject to the normal state sales tax of 6.625%.

The state Legislature could allow local governments to tack on an additional 2% sales tax if they want.

Can my town or county ban weed stores?

Yes. Counties and local municipalities will be able to draw up their own rules and regulations regarding cannabis companies, including prohibiting them altogether.

If you want a legal cannabis store in your town, you may have to show up at city hall to fight for it. Politicians in other newly legal states have been quick to ban legal stores. Yes, you may end up fighting for, and voting for, legalization more than once.

Will there be a lot of new stores?

Probably, but details have yet to be hashed out.

New Jersey currently only has 12 medical dispensaries. The state might need a few (hundred) more to meet the demand of a state that’s home to 9 million people. By contrast, Washington state has a population of about 7.6 million people. Its cannabis control board has capped adult-use retail licenses at 556.

The New Jersey Legislature will likely allocate licenses for underrepresented communities and individuals impacted by the war on drugs, but details on that front are TBD as well.

Will there be a sentence expungement process?

Question 1 calls for the creation of an online portal to allow individuals with marijuana convictions (possession charges of up to five pounds) to expedite expungements. The amendment also requires pending possession charges to be downgraded or dismissed.

There are no details, however, regarding when individuals will be able to begin the expungement process.

Additionally, the amendment prevents employers, landlords, and others from discriminating against people with marijuana convictions, and permits state residents to take legal action against such discrimination.