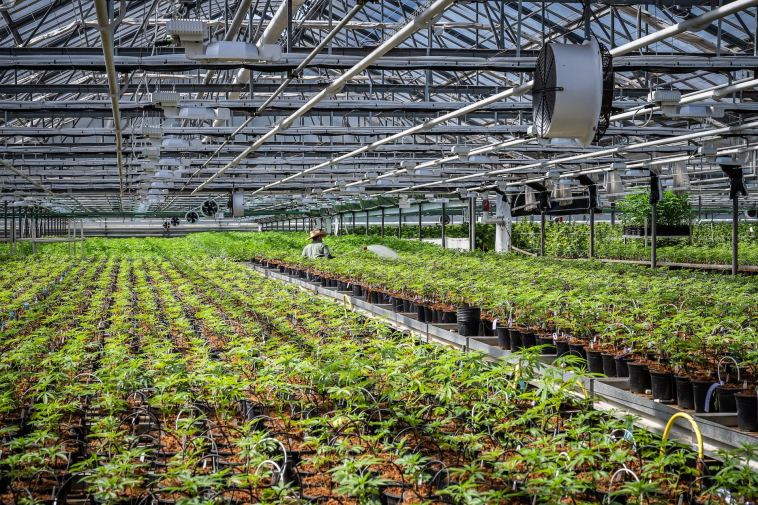 Prepare to spend far less of a percentage of your income on cannabis as legalization spreads and prices tumble.

According to the new Leafly Cannabis Harvest Report 2022 published today, cannabis prices tumbled despite a year of historic inflation. Adult-use cannabis farmers in the US grew 554 more metric tons of cannabis in 2022 than they did the year before. Still, the crop’s value fell by $1 billion. That’s because legalization makes the price of pot go down. Large-scale farming and high technology have driven wholesale prices to historic lows in Colorado this summer. Flower grams can go for $4 in Oregon.

Prices promise to fall further. In conclusion, we’re only one-fourth of the way out of prohibition, according to the report.

How much legal weed does the US grow?

How much legal weed does the US grow? It’s a question both big and nebulous.

Gallup reports that about 68% of Americans are ready to end the 85-year-old war on marijuana and switch to a regulated system. But so far, not a single regulator or politician can give you a progress report on that switch. Leafly can.

According to the second annual Leafly Cannabis Harvest Report 2022, adult-use cannabis farmers grew 2,834 metric tons in the last year. Based on federal use surveys, 2,834 tons comprise only about one-fourth of Americans’ annual demand for marijuana. So we are only 24% of the way out of disastrous, failed prohibition. To get out, the remaining prohibition states are going to legalize, as well as Congress, and it’s going to take your voice.

The Leafly Cannabis Harvest Report 2022 finds that, generally, Western US weed farmers grew too much over the last year. Meanwhile, Midwest and Eastern farmers did not grow enough to meet their region’s demand. Because of federal prohibition, licensed farmers cannot sell across interstate lines. However, the illicit market does. This dynamic hurts legal western farmers, while over-charging Midwest and East Coast customers. Residents of Illinois and Maine, for example, pay some of the highest prices for marijuana in the country. Colorado, Oregon, and Californians pay some of the lowest prices.

Our findings suggest Congress needs to do the will of 68% of voters and send cannabis reform bills to President Biden this year. Americans want to vote with their dollars for craft, legacy, sustainable cannabis but they can’t—yet. Small farms are failing and corporate ones are taking over with each day that we delay.

Dozens of farmers reported in, reflecting regional booms and busts in the fast-changing field.

“The prices this year are at an all-time low and honestly pretty tragic for all the craft farmers. Lots of people will not be able to afford to keep their farms going. Our community as a whole is in a bad financial place.”

By contrast, Dusty Shoyer, President and COO of Revolution in Illinois and Missouri said: “It’s been a great year for Revolution: We finally finished two expansion projects and brought 10 more small batch cultivation rooms online in Illinois and a high-tech mini-grow in Missouri. Both are harvesting and producing amazing results.”

What is the Leafly Cannabis Harvest Report 2022 methodology?

Leafly News’ award-winning senior editor David Downs and researcher Amelia Williams, along with Bruce Barcott, Whitney Economics, and other contributors have reported the findings. The team spent the fall finding the average price of marijuana in each state in the study, determined how many pounds those states grew, then multiplied those two factors to determine the crop’s value in each state—and nationally. Photographers CannaPics and Mike Rosati Photography captured the trends defining cultivation, and Sasha Beck designed the report.

We studied the 15 operational, adult-use states where any adult over the age of 21 can go in and buy cannabis like they can any other crop. In this year’s report, we also added the four states that began sales in 2022: Montana, New Mexico, New Jersey, and Vermont. Excluded from the report are medical marijuana markets and the illicit market, whose inclusion would falsely inflate our figures. More details are on page 27 of the report.

Why do we need a Harvest Report?

Neither the USDA nor state regulators count the crop like they do other agriculture. For the second year in a row, Leafly has exclusively computed adult-use cannabis crop production and value. We did this because voters and leaders need this basic info to make choices.

Regulators in most legalization states cannot supply the most basic fact about their cannabis markets, such as, “How much pot did you grow?” or, “How close is society to supplanting the illicit market?”

Thanks to Leafly, voters and policymakers have the info to pursue policy changes. Cannabis farmers can use the data to start wielding political power in proportion to their economic clout. Why do tobacco farmers get federal disaster aid, while licensed cannabis farmers cannot?

At its essence, cannabis is an agricultural product. Seeing it through that realistic lens makes the issue far more clear. Activists are using Leafly Reports—including the Cannabis Jobs Report, and the Opt-Out Report— in local, state, and national legislatures to advance legalization and to normalize the cannabis trade.

Download the report, and share it with your industry peers and regulators. We hope it sparks further research and better data collection. We’ll also have updates in the weeks ahead forecasting oversupply in Michigan, and enforcement in Oklahoma, Oregon, and California.

Reach out to us with questions, corrections, clarifications, and more at news@leafly.com.

US marijuana production and value:

Q: How much weed does the US grow?

A: Adult-use cannabis farms in the US grew 2,834 metric tons of cannabis in the past year. Medical and illicit production is 3 to 5 times bigger and includes some illicit inflows from Mexico.

Q: How much is weed farming worth?

A: As a crop, adult-use cannabis is worth $5 billion in 2022 and is the sixth most valuable crop in the US—ahead of potatoes or rice.

Q: How is weed legalization going?

A: America is only about one-quarter of the way to marijuana legalization, as measured by the legal amount grown (2,834 metric tons per year), versus the estimated demand (12,000-15,000 metric tons). Only 15 states allow adult-use cannabis sales in 2022.