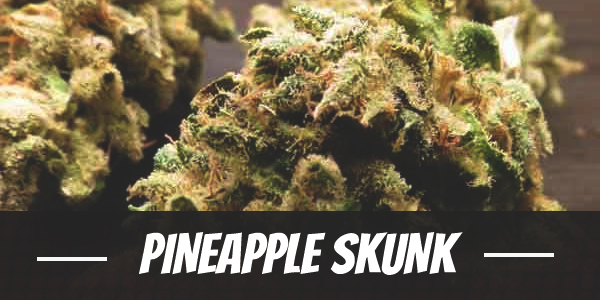 For over twenty years since its release, Pineapple Skunk has rewarded its growers with massive crystal-coated buds packed with THC. It is one of the rare hybrids that is truly suited for commercial purposes. The reason for that is not only because of its insane flower production but also for its iconic Sativa effects.

Old-timers remember this strain as Old Sweet Skunk. It was developed by Humboldt Seeds in Northern California using three unlikely strains. Each though possesses unique traits that have made them standouts and classics in the marijuana scene.

Here are some amazing seed deals. Buy 10 and get 10 seeds for free!

The first is Skunk No. 1. For more than four decades, it has provided countless people around the world a high-intensity mind and mood uplifting high. Its greatness comes from generations of descendants that have also made names for themselves. If there is one thing that distinguishes it from others, then it is its trademark skunky fragrance.

Not to be outdone, the second strain used is Cheese. As its name implies, it boasts of a sharp and sour aroma of cheese. Its prominence, though, is not only due to its smell but more so due to its calming and soothing high.

Pairing cheese and skunk seems like a weird proposition with regards to its fragrance. But the point of developing new hybrids is not only because of that. It is also about the plant structure and the psychedelic effects it brings.

Hence, the third strain used is Pineapple. Like the other two strains, its name is suggestive of its dominant scent. More than that, it passed on its Indica heritage while retaining enough of the Sativa influence of the other two.

Pineapple Skunk is a beginner friendly joint so as long as its used within limits. This fast-acting strain boasts of up to 19% THC hence users should never underestimate its potency.

The influence of Skunk is immediately felt soon after the first toke with a very pronounced euphoric head buzz. Combined with the physical effects trickling in, a sense of happiness sets in. Feeling uplifted and in good spirit, users often find themselves giggly and much more sociable.

In time, the full Indica effects will kick into the body. Once it does, the deep relaxation it induces is likely to cause a couch-lock. Most users at this point are likely left in a cerebral spacey high. Some may go into deep introspection too. However, use the strain a little more, and the psychedelic effects may include mental confusion and visual distortion.

As its name suggests, Pineapple Skunk smells like what else but pineapple. It has a tropical citrus fragrance that is both sweet and tangy. It also has a pronounced cheesy aroma that contrasts its pungent skunky undertone. A spicy note becomes evident soon after grinding the bud into smaller pieces.

Pineapple Skunk’s tropical aroma is apparent in its flavor. It has the sweet taste of pineapple but with a tinge of skunk. Though consuming it may be a little harsh on the throat, its creamy citrus aftertaste is enough to compensate.

Having a dry mouth is one of the most common reactions to smoking marijuana, whether it is Pineapple Skunk or others. Other people may also experience some dryness in their eyes. In most cases, users tend to brush off these symptoms due to their mildness.

Apart from the cottonmouth and dry eyes, users of this bud may feel dizzy.

However, the degree to which these conditions manifest is wholly dependent on the amount of herb smoked. Not to mention, individual tolerance also is a factor. Smoking a little too much may cause them to feel a bit anxious and even paranoid. Thus, it is best to smoke marijuana in moderation.

Surprisingly, even with an unremarkable CBD content, Pineapple Skunk is an excellent pain reliever. Much of it is due to the sedating body high it delivers. In soothing muscles, not only does it help in relieving tensions but also reduces inflammations.

But, that is not all this strain offers. The euphoric high it provides is a prelude to all its soothing body effects. Because it uplifts the mood, Pineapple Skunk offers a degree of comfort for people with depression or PTSD. Such trait also makes it a great stress reliever.

Pineapple Skunk is an Indica dominant plant that even beginners can cultivate. Thanks to its predecessors, it is quite sturdy. Other than extreme cold and heavy rain, it can withstand most changes in weather. Apart from growing fast, it also provides an abundant yield.

Growing Pineapple Skunk indoors can get a little tricky. Because of its extremely pungent smell, growers will have to be wary. Hence, the use of a carbon-activated charcoal filter is necessary.

This strain has a flowering period of only 8 to 9 weeks. Once ready for harvest, each square meter can produce between 8 to 12 ounces of buds.

Pineapple Skunk is renowned for its performance outdoors. It especially thrives best in humid weather or climates with temperatures 21°C to 26°C. With the right amount of sunlight, this hybrid can flower as early as the last week of September. Once mature, it can grow as tall as 10 feet. Humboldt recommends supporting its massive development with cages and a secondary trellis. At this time, growers can expect a yield of 29 to 88 ounces per plant.

Have you ever smoked or grown your own Pineapple Skunk? Please let me know what you think about this marijuana strain in the comments below.