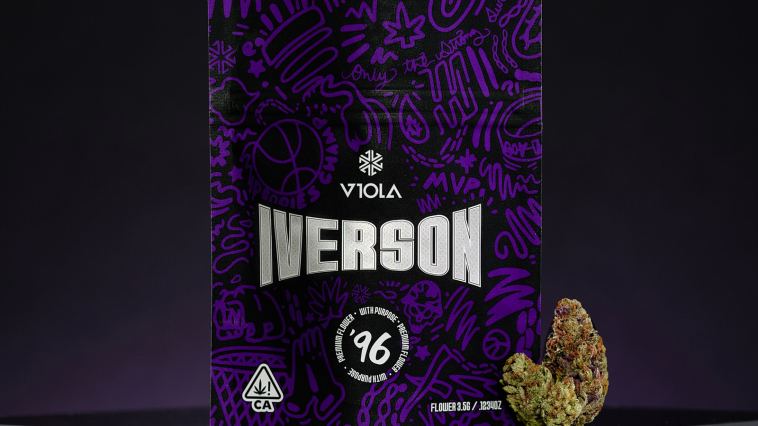 This month of The Drop, Dante Jordan’s column rounding up all the can’t-miss strains and dabs from the best brands and growers looks at anticipated releases from Viola, Ball Family Farms, and Insane.

New month, and a whole new batch of strains that you should be putting in your pipe and smoking. Here are the cannabis strains that are hitting menus in October.

A couple of months ago it was announced that Viola, owned by former NBA Player, now cannabis mogul, Al Harrington, had entered a multi-year partnership with NBA legend Allen Iverson. It’s called the Iverson Collection, and on October 2, with a party in Los Angeles, they debuted the brand’s first strain: ’96. It’s named in homage of the year The Answer was selected with the first overall pick by the Philadelphia 76ers in the best NBA draft class of all time (sorry, 2003).

Styled as “Iverson ’96” on some menus and websites, ’96 is an indica-dominant hybrid, bred by crossing Secret Kush Mints with Grape Stomper. It has tightly packed buds that are so purple and white it ends up looking just like the Iverson ’96 packaging.

The flavor kicks out a grape-forward terpene profile, backed by pine and earth. While ’96’s aesthetics are next level, what really makes this strain special is the high. Face a joint of ’96 and you’ll feel super mellow, relaxed, and happy. It puts a smile on your face while washing stress away, turning you into the chillest version of yourself. Keeping it a buck, it’s the exact type of weed and experience that I would picture Allen Iverson smoking.

Scoop it up at Elevate Los Angeles or the Jade Room’s Santana and Torrence locations, where the Iverson Collection lives exclusively.

What started as a mixtape series (Vol 2. is fire) from California hip-hop artist Problem is now also a cannabis brand from the same man. Coffee and Kush comes forward with three new strains: Mocha, Cappuccino, and Black. It is available exclusively at the Wonderbrett store on La Brea. Check out the weed; check out the music.

Everything I’ve ever smoked from Insane was some of the best flower I’ve smoked in years. Just a couple of weeks ago, I was doing my best to preserve the last nug of its Mamba Juice because it was so damn good. This month, the brand known for its Kush genetics will be coming forward with three new strains that I cannot wait to smoke: Cali Lights, OMG, and Julia. Especially that Cali Lights — I’ll admit, the packaging got me.

Cali Lights is a Seed Junky Genetics-bred, Insane-grown strain that was created by crossing Zkittlez and Kush Mints. This is the first run of it to hit stores. Insane’s team told me that Cali Lights has a gassy, cool mint snap to it with hints of lime and pine. The terpene profile is dominant in caryophyllene, limonene, and humulene. When you smoke Cali Lights, you can expect an authentic kush taste with a smooth and distinct flavor that leads to a very balanced body buzz and head change.

Ball Family Farms is well-known for its good weed, proprietary genetics, and strains named after famous movie characters in Black culture. Its flagship hybrid Daniel LaRusso is some heat, as is the Laura Charles and Bruce Leroy. In late October, the brand will be adding to the collection by releasing its newest banger: Nino Brown.

Played by Wesley Snipes, Nino Brown is the main character in the movie New Jack City. As far as Nino Brown the strain goes, the indica-dominant hybrid was bred by Ball Family Farms using proprietary genetics that it keeps under wraps — no matter what. Through email, Chris Ball, the brand’s founder, told me, “BFF prefers to keep their proprietary strain genetics under wraps, challenging the culture to try it and suss it out.”

Nino Brown kicks out a mix of gas and creamy scents, with a flavor that resembles gelato and candy. It is limonene-forward, backed by caryophyllene, and the effects are expected to be extremely potent and sedative.

Nino Brown has existed for only six months, so you’ll be among the first to try Ball Family Farms’ newest offering when it hits menus later this month. Nino will be available at 20 different locations, including Sixty Four & Hope, Wonderbett, and all nine Catalyst stores.

Solstice out in Washington State puts out some really great weed for affordable prices. Its top-tier brand, Solstice Reserve, only costs $35 for an eighth, but it smokes just as good as the brands that charge $50. This month, the Seattle-based company is coming out with a fresh batch of LA Kush Cake. Yes, I said LA Kush Cake for less than two Harriet Tubmans.

LA Kush Cake was originally bred in 2019 by Seed Junky Genetics, and I’m telling you man, SJG has the strains world in a cat’s cradle. It’s a cross of Kush Mints and Wedding Cake that smells like an earthy mix of herbs and vanilla, and tastes pretty much the same with some added sweet notes.

Though not considered specifically sedative, the indica-dominant hybrid effects come on strong with a heavy, stoney experience that will have you in chill mode for several hours. LA Kush Cake’s terpene profile is dominant in caryophyllene and myrcene. If you’re out in Washington, definitely get your hands on this absolute steal.

The Drop: 5 strains that are hitting menus in October originally appeared on Weedmaps.com