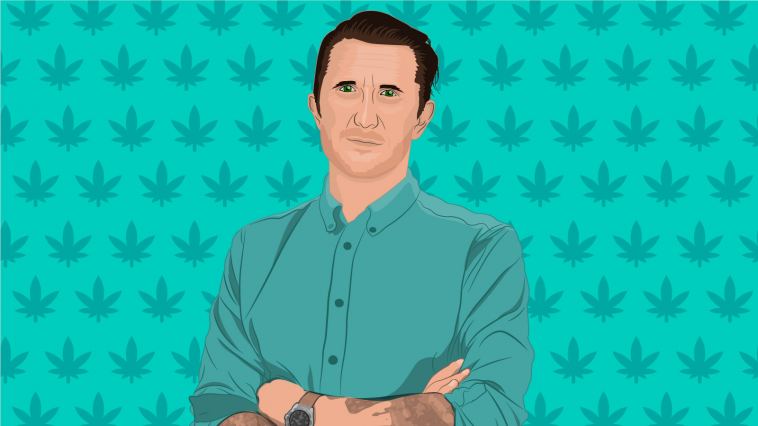 Visual artist Scott Campbell is known for tattooing A-list stars and selling out gallery shows around the world. He also helped pioneer the luxury cannabis movement in the mid 2010s with his uber-chic brand Beboe.

Dubbed the “Hermes of Marijuana” by the NYT in 2016, a time when people still used the racially charged term interchangeably with cannabis, Beboe burst on the scene with a pared-down product line that featured low-dose pastilles and solid gold vaporizers. Founded by Campbell and Clement Kwan, a fashion executive who, at the time, was President of global e-commerce retailer YOOX but later moved on to serve as COO of Marley Natural, the two executed a brand that was far more sophisticated than others on the pre Prop-64 market.

Given this unicorn union of fashion exec and artist, Beboe was as high-end aesthetically as it was conceptually. A simple rose gold vaporizer presented in a white slide out-box adorned with rose gold etchings by Campbell. The look was simple, concise, and dinner party ready. Things were further elevated by celebrity friends like Orlando Bloom, Sharon Stone, and Justin Theroux, all of whom attended Beboe’s West Hollywood launch, which was a seated dinner party as opposed to a typical industry mixer commonly held in warehouses turned event centers.

Despite this lofty presence, the story behind the brand itself is sweet and emotional. “My mom was diagnosed with cancer when I was seven,” Campbell told Weedmaps. “She fought it for about eight years before it finally got the best of her. She was in and out of treatment, so my grandmother, who was named Be Boe (short for Bernice), took care of my sister and would come from Louisiana on the weekends to where we lived in Houston, because there was a big cancer treatment facility there.”

He continued, “She would always bring two boxes of brownies, one for the kids, and one for my mom. The ones for my mom were always kept lock and key in the closet, and my sister and I would tear the house up trying to find them. It wasn’t until years later I found out Grandma was putting weed in my mom’s brownies.”

Despite Campbell’s early and oblivious connections to the plant, his personal journey to using cannabis was more nuanced. “I had the classic high school experimentation, but then actually I got away from it a little bit. I don’t like being out of control. Even though I’ve always hung around with punk kids who would drink and smoke themselves into comas, I was always a little bit more measured with everything.”

“As my art practice evolved, I found this new way to engage with cannabis that was less about escaping the world around me and more about getting in touch with the world inside of me,” he said. “Creativity is a relationship between your subconscious and your conscious. In your subconscious, you have this kind of dream state where these big gooey emotional ideas form. Then, your conscious mind is the one that takes the gooey idea and manifests it into a painting, a story, anything.”

He continued, “Cannabis in my art practice has really helped me go back and forth across that membrane between conscious and subconscious, and quiet the anxieties that can get in the way of the ideas.”

While Campbell made a name for himself tattooing mega celebs like Josh Hartnett, Marc Jacobs, Robert Downey Jr, and Courtney Love, his most recent artistic foray has been in the white hot world of NFTs.

Unlike artists who create work on a medium that isn’t living, tattooing is a totally finite art form. The artist is paid hourly for creating a one time work, which then disappears into the ether of existence when the customer leaves the shop. The work is rarely seen by them, or anyone who doesn’t know the person with the tattoo, ever again.

“I’ve been tattooing for 25 years, and part of the reason I started branching out into fine art is because I wanted to give the work I was doing a larger life,” he said. “As a tattooer, we sell hours in our chair, and that’s the way we charge. There are no other creatives that function like that. As much as the NFT is already an overused acronym, I’m using those as a way to shift the way tattoos are valued. The application process of the tattoo isn’t the thing, the images we’re creating are the thing. So I’ll sell you the image with the option to get it tattooed, and it really stands to change the way tattooers operate.”

As for Beboe, the brand continues to kill it as a multi-state operator. Though they toned down a bit in California due to market saturation, they’ve just launched in Illinois, and are looking forward to entering the Nevada and Massachusetts markets. “With Beboe, we wanted something that could replace a bottle of wine at dinner, and elevate dinner party culture to include cannabis,” he said. “So for us, it’s always been less about a name or attaching celebrities to the brand, and more about building a community.”

Here are the products Scott Campbell can’t live without.

“Someone gave me this pipe the other day, Alex Reed, I think was his name,” said Campbell. “He makes these super classy little clay pipes. Mine is definitely my go-to anytime I want to smoke flower.”

Alex Reed is an LA-based clay artist who designed the pipe for Commune, a design studio also based in LA. They come in three different glazes, “Adobe,” “Blue Dream,” and “Indica,” each costing  $180.

“I love the beverage CANN,” Campbell said. CANN is a microdosed cannabis tonic with delicate, trendy flavors like lavender lemonade and jalapeno pineapple, and even trendier investors like Gwenyth Paltrow and Chelsea Handler. Each beverage is dosed with a blend of 2 milligrams THC and 4 milligrams CBD that has been nano-emulsified so it hits you right away.

He continued, “I feel like they do a really great job of dosing as well. One CANN really feels like the weed equivalent of one alcoholic beverage.”

While he’s clearly partial to all Beboe products, Campbell’s favorite is their classic Inspired Vape. “The only downside is it hasn’t been a part of my life now so much that I haven’t been traveling. But man, when I was out and the world was turned on and I had downtime, [the Inspired Vape] was like my bedtime lullaby every night. It was the best, and it still is, I just don’t have as much trouble sleeping now as I did in 2019.”