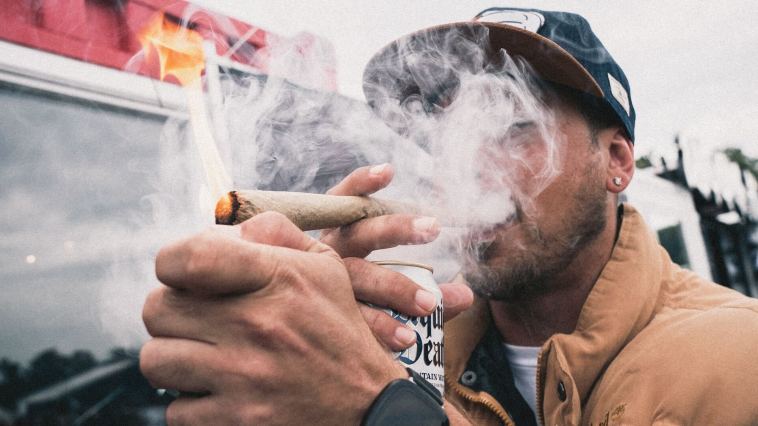 The rich intersection of pot and pop culture is on full display at this international musical festival, which also unites weed lovers in Florida, California, and abroad.

At Rolling Loud New York, 420 starts when the doors open, and ends when the headliners bid the crowds adieu. For three days, the parking lot of Citi Field was a shrine to the rock stars of today. Future, who calls himself the modern Hendrix, dubbed it “one of the livest” Rolling Louds he’s performed at (and he’s done a few), even though his headline set was cut short by rain.

Until Sunday’s grand finale, there were no clouds or showers to spoil the fun. Aside from the smoke that hovered permanently over each crowd in between, during, and after sets.

Outside the venue, local entrepreneurs pushed everything from Jell-O shots to Zaza eighths to hoodies. While inside, multiple booths and installations catered to universal cannabis touchpoints, like the ice cream Cereal Bar, Snipes skater section, and Kalibloom hemp station.

“It’s so crazy to be smoking in front of cops like this,” Kris said after passing dozens of NYPD officers with a lit joint. You can smoke weed anywhere that you can smoke cigarettes in New York City. And the office of cannabis management recently confirmed with Leafly that rolling up on the subway is not against the law.

We rolled up on the way to Queens and planned to stay high and hydrated as we navigated the maze of epic performances, including sets by A$AP Rocky, Nicki Minaj, Lil Baby, and many more.

But not everyone came to fan out. Damiete, a 20-year-old artist from Atlanta, flew up for networking purposes. “People came to see their favorite artists, but I came to work with ‘em,” she told Leafly. “And thank God it was successful, I met some cool people that I hope to do business with in the near future,” Damiete said.

Leafly arrived Friday afternoon to find diehard fans and weed lovers dressed to the nines, ready to show out for the lyricists they love. While New York’s adult-use cannabis industry remains under construction, Rolling Loud New York 2022 felt like another small step forward for cannabis in The Empire State.

Here are five takeaways from Rolling Loud New York to keep in mind as the festival grows.

Rolling Loud started in Miami, Florida, before spreading to other major American centers, including Los Angeles, the Bay Area, and of course, New York. In 2019, there was a Rolling Loud festival in Sydney, Australia, and 2022 has seen multiple international dates as cannabis laws loosen  globally.

In July 2022, Rolling Loud collaborated with Dutch festival Woo Hah! and broke ground in Portimão, Portugal. Oh, and in 2023, it’s going to Thailand. The festival is clearly following the path of legalization on a multi-national level, and it’s working quite well.

From start to finish, the air was thick with a thousand-strain concoction of fragrant terps. And all of the loud came from guests bringing their own stashes. Drinkers were sanctioned to small consumption areas—the tables have started to turn.

New York hasn’t kicked off adult-use sales (and might not this year), but plenty of home growers and traditional operators were poised to fill the supply gap both outside and inside the venue.

There are whispers that Rolling Loud, like San Francisco’s Outside Lands festival, plans to get weed into the vendor stations. That would be a huge breakthrough for Rolling Loud and similar events, which are missing out on a fortune by sticking to a BYO-Bud policy.

Waferz, for example, is a cannabis and apparel brand. They were inside RL selling merch, but who knows what they could offer next year if given the green light to sell bud. The Loud Club, a VIP area for table service and a less crowded viewing experience, seemed to be the perfect kind of space to host a smoking section in the future.

3. Rappers are the next wave of cannabis tastemakers

Hate it or love it, rappers are all over the weed game, and they won’t be leaving any time soon. Lil Baby, NEMS, and Soulja Boy are just a few of the Rolling Loud artists who already have their own cannabis lines now, and you better believe there are plenty more in the works.

Rolling Loud’s dress code is “dress to impress,” which means designer fits, dancing diamonds and hot shoes reigned supreme. But with a Friday night cold snap, many headed to the merch tent for a hoodie to layer up and avoid a chill.

By Sunday, merch fits populated the crowd. If guests needed water, there was a Liquid Death members club with water, a private bar, and airbrush tattoos. Should you run out of Backwoods, the Manny’s Bodega booth had you covered, and a VIP beauty bar offered makeup touch ups.

For a three-day festival with the world’s most lit cannaseurs, you better not show up empty handed. If you do, the $40-bags of Zaza for sale outside the 7 train, and the ridiculously-taxed $12-Backwoods packs available inside will add up quickly.

Small, see-through bags are required for general admission guests, but they’re not checking you for pack or paraphernalia.

The edibles kicked in right on time, and the blunts somehow burned through the rain. It added up to a post-Rolling Loud buzz that came courtesy of marijuana and music—that one-of-a-kind blend that never fails to lift us all to the higher levels of this human experience.

Sunday night got a little dicey after a torrential downpour started just as Offset performed “Bad and Boujee” (rain drops, anyone?). But fans were willing to stick it out and mosh in the rain until thunderstorms officially closed things down. Some of us felt it all the way down in our socks. But as rising star Glorilla so eloquently put it, “I don’t be fucked up ’bout nothing ’cause I be smoking weeeeed.”

Look below for shots of the headliners.