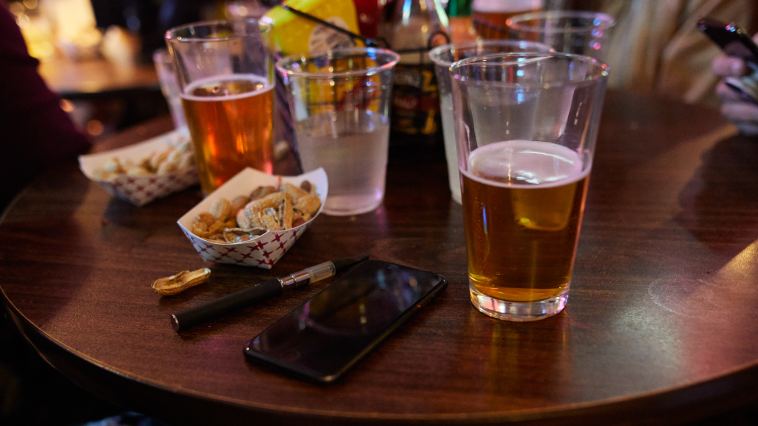 Oktoberfest may not be happening in Germany this year, but that doesn’t mean you can’t smoke like it is. Just like how beer is made from hops and has that hoppy smell and taste to it, so can cannabis. Both cannabis and hops contain similar plant terpenes that produce a hoppy aroma, mostly due to the terpene humulene. Hops also contain myrcene and beta-pinene, which can be found in many cannabis strains.

To celebrate Oktoberfest wherever you are, here are a few cannabis strains known to have a high amount of terpenes that almost mirror an IPA.

If we’re talking hoppy strains, one thing to note is that it would be pretty hard to put your nose to a cannabis strain and only detect hops. Some strains have a funky aroma mixed with a hoppy aroma mixed with a piney aroma mixed with … you see what I’m getting at? Either way, OG Kush is a strain that is rich in humulene and might hit your nose with some hoppy vibes. Strains with OG Kush in it, and strong influences from the plant, will have it too.

OG Kush is one of the most famous cannabis strains ever. Its potency and uniqueness set the bar for West Coast cannabis long ago. Still today, we’re riding its genetics. It’s expected to get you super high, no Rick Ross, and that’s really all you need to know to choose this cultivar for celebrating Oktoberfest.

GSC is the descendant of F1 Durban Poison and OG Kush. It too is known for being high in humulene. GSC will hit you with a loud aroma that’s a mix of damn near everything cannabis brings forth. It’s funky, it’s sour, it’s citrus — it’s even dessert-like.

Effects-wise, some straight-up GSC or even Thin Mint GSC will have you sitting back like, “Wow, this is exactly what weed is supposed to feel like.” Weedmaps reviews say the top GSC effects are happy, relaxed, and euphoric, and the top reported flavors are earthy, lemon, and citrus.

Headband is some fire. Beyond the terpenes, what you really need to know is that Headband is not for the play-play when it comes to effects. I remember first smoking some back in 2012 and thinking, “Oh my god, yo. This ain’t that stems and seeds type feel that we used to. The hell is this?!”

Headband is a legendary cannabis strain. One of those that true, everyday smokers will always recognize by name. It’s named after a cerebral high that feels like your head is wrapped up in euphoric stoniness. Headband is a cross of OG Kush and Sour Diesel, so it makes sense that it would have a similar flavor and terpene profile to both of those.

White Widow is a strain from way back in the ’90s. It has a strong peppery, earthy type of smell and taste and is one of the original strains that defined the type of effects that people expect when they buy something that’s a pure hybrid. Not indica-leaning, not sativa-leaning, pure hybrid.

This hybrid was originally bred by Green House Seed Company, one of the pioneers in the strain-breeding game. It is made up of Brazilian landrace and South Indian landrace genetics. It’s a great strain for anyone that wants to smoke throughout the day, but not be too bogged down by the THC’s intensity. White Widow has been used to create other popular strains like Berry White and White Fire OG (also known as WiFi, WiFi OG).

Candyland — sometimes called Candyland Cookies — is a special strain because it’s a sativa that hits like an indica. It’s a perfect example of why you can’t always follow those distinctions towards the types of highs you want.

Candyland crosses Granddaddy Purple and Platinum GSC. It will definitely leave you stoned for hours; however, the high will be super uplifting and energetic. Though Candyland contains hoppy humulene, the other terpenes from this one combine to give off a more earthy, sweet type of flavor.

GG4, better known as Gorilla Glue #4 or simply Gorilla Glue, is famous for being loud, sticky, and potent. It contains humulene and has somewhat of a hoppy scent to it; but more so, it has a weird dank chocolate and nut type of terpene profile that will really send your senses for a ride once you crack open a GG4 jar. When you smoke, dab, or vape this cultivar, you can expect it to be super euphoric, relaxing, and schedule-clearing as you’ll be so stoned that all you want to do is, well, nothing besides kicking back, chilling, and smiling about life. Smoke it up for Oktoberfest and imagine yourself in Munich donning a pair of fresh lederhosen.

Ending this list is Death Star, one of my personal favorite strains ever. It’s one of those that I never have to question; it’s going to kick my ass and hit me with couch-lock each and every time. Couch-lock is that super high, sleepy feeling, where you might as well just go to sleep because the fight to keep your eyelids open will be exhausting in itself. Death Star does that. Genetically, it’s a cross of Sensi Star and Sour Diesel where that humulene most likely comes from. It’s earthy, gassy, pungent — everything that you’d want from a heavy-hitting cannabis strain.