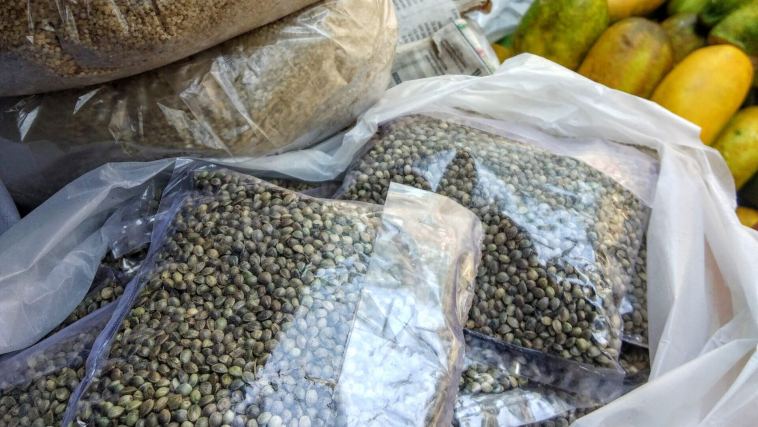 With so much attention paid to America’s push toward legalization, it’s easy to lose sight of the fact that cannabis cultivation—and cannabis culture—date back thousands of years.

Throughout India and Southeast Asia, indigenous farmers continue to grow cannabis and make hashish using methods passed down for untold generations. Despite a boom in demand and a global push to end prohibition, these traditional cannabis production communities continue to struggle economically, as changes in climate and encroaching tourism and development threaten their existence.

Shop for cannabis seeds near you

And now they find their unique landrace cannabis genetics under threat. Many of these storied lineages date back farther than the oldest wine grape varietals. These landrace cannabis strains may also hold the genetic building blocks for breeding the next generation of game-changing hybrid strains.

Attempts to locate, preserve, and proliferate these strains date back decades. But most such efforts have been led by geographic and cultural outsiders, often driven more by profits than preservation.

Over the past five years a grassroots, locally-led, globally crowdsourced effort has emerged to help defend and support these local cannabis-growing communities. The Indian Landrace Exchange describes itself as a “collective of Indigenous frontline farmers, seed collectors, and preservationists” with the goal of supporting these communities economically while helping spread and preserve their landrace strains.

Leafly: When did you first become interested in cannabis?

Deepak Chaudhary: When I first started consuming cannabis, I was smoking hashish that was not always good. So I had fun, but it didn’t entice me to really dig deeper into this plant. It wasn’t until I entered college that I had a little more exposure because I met people from different regions with different cultures and experiences.

I started smoking with people from Himachal Pradesh, which is a Highland region. And I was like, “Okay, I want to go wherever this resin [hashish] comes from.” That was the inspiration that eventually led to the Indian Landrace Exchange.

Genetics and flower unique to the region

Leafly: Where did you go first?

Chaudhary: In 2016, I went to Malana, which is the Mecca of cannabis in India. It’s almost like a religious pilgrimage. There, for the first time, I saw indigenous people using very traditional techniques to maintain their crops and domesticate them. From planting to harvesting to making concentrates and getting them to customers, the whole process was just so raw.

As I learned more about these communities, I began to think we should be documenting and preserving this way of life because these remote regions are changing rapidly. Every year you see more tourism, more houses, more shops, and less cannabis.

“When I visited the village, the plants were fully flowered. The smell was thick in the air everywhere.”

The first time I visited, it was October. The plants were fully flowered. When I reached the village, the smell was thick in the air everywhere. There was no escape from it, and that’s so beautiful. It’s something that leaves a very deep imprint on you. At harvest time, you also see a lot of people sitting on their porches rubbing down the plants to make hashish, which is basically the crudest form of extraction. But while hand rubbing may sound very simple, there are actually a lot of details. There’s a real art to it.

Technically in India cannabis is not permitted, but in Malana there’s not much law imposed. The nearest police station is 12 miles away, and to drive that road takes three hours. Those police are also from the same area, so basically they understand that these people are not committing any violent crime or anything like that. They’re farmers who just happen to have a different choice of crop and are mostly left alone. So the environment of the village is super peaceful.

Being there made me want to visit all of these kinds of places, meet the people, try to understand their culture, and then educate others about it. That includes  the challenges they face, and how the landrace varieties of cannabis they grow are endangered.

I went next to Kashmir, and eventually to Southeast Asia and Pakistan. Now we have a network of friends and communities of farmers in all of these places. That’s how the Indian Landrace Exchange developed in an organic way into a grassroots effort of close to a hundred people that has taken on a life of its own.

How sticky is that ancient local bud?

Leafly: What does the Indian Landrace Exchange do to help these farmers?

Chaudhary: We became a bridge between the indigenous world and the world of legal cannabis.

For people in this newly legal industry, there’s a whole galaxy of possibilities in terms of finances. But that’s not true for people in traditional cannabis habitats—even though they’re doing most of the work.

When these indigenous farmers want to sell their resin, they can’t go make deals on their own. They have to relinquish it all to organized, underground groups that control the distribution to major markets, where they can get a good price for it. Some part of that wholesale price flows back to the growers, but not enough.

No matter what indigenous community you visit, they’re all struggling—despite how much they’re growing. But if we can help preserve their landrace genetics, while also helping them sell seeds to people all over the world, that changes the dynamic.

Leafly: And these seeds are the “landraces,” right? What does that term mean when it comes to cannabis?

Chaudhary: A cannabis varietal which has adapted to one specific locale over time could be classified as a landrace cannabis variety, although there are many different ways to further sub-categorize it depending on how it has been developed.  By mapping the genome of plants grown in indigenous communities, we have been able to prove these are unique native varietals dating back thousands of years.

“Our first priority is preservation. Then we make sure a fair share of the revenue generated by selling these seeds goes to the farmers.”

Our first priority has always been preservation. Then we make sure a fair share of the revenue generated by selling these seeds goes back to those farmers. Some people will go to these indigenous people and pay them $1,000 for a million seeds. That’s a lot of money in those communities—but they’re also doing the same colonialist thing that’s been happening forever.

What we do is create small collectives amongst the indigenous farmers. I tell them, “Every year we’ll come back and take some samples from each of your fields.” And then I show them all my costs and incomes and explain that their unique landrace genetics are even more valuable than the resin they produce.

That’s sometimes very hard for them to fathom, until I start paying them more money than they’ve been making off the resin. And what that does is not only help financially liberate people, it also assures them that—should anything happen to their crops—they must still save these seeds. Because as long as you have the seeds, you have everything.

Leafly: What’s a good example of how this changes the dynamic for farmers?

Chaudhary: In the town of Mastung, in Pakistan’s province of Balochistan, we worked with a grower who had a water crisis in a dry place where you have to dig a thousand feet down to reach ground water. That costs a lot of money. So we arranged a couple of seed sales—while preserving and documenting his genetics—and that earned him enough revenue to pay for digging a well. It’s not something that’s going to transform someone’s entire life, but it’s significant. We try to do things like that wherever we go.

Leafly: How are seeds made available to growers in Europe and North America?

Chaudhary: All of the information we have about the genetics we collect and preserve is available free on our website. From there, I basically work with a few selected seed banks, which you can find on my Instagram page.

Whether you’re an American grower or a European grower, my first suggestion would be to visit my Instagram feed and educate yourself about different genetics from different regions. We also document all of the tours we take so you can match each of these landraces to the community where it grows. It’s important to find one that will grow well in the climate where you live, so we make that information available as well.