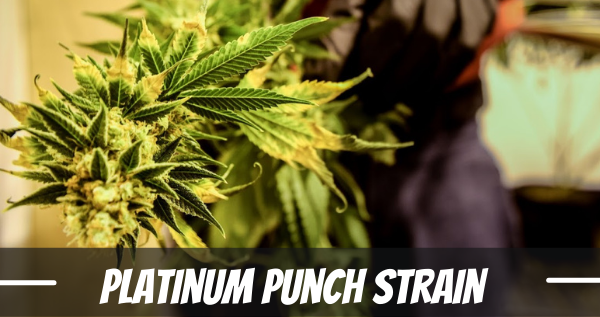 With so many different strains in the world, creating a unique hybrid strain like the Platinum Punch Strain is not an impossible task, considering the hundreds of thousands of possible various strain combinations.

However, it’s not that easy to create a strain that truly stands apart from the rest.

The one-of-a-kind Platinum Punch strain essentially holds the heavyweight title belt for “getting you higher than Joe Rogan’s viewership stats.”

They combined the aesthetically pleasing Purple Punch strain with the THC-loaded Platinum strain to produce the notorious Platinum Punch strain, dishing out a mind-bending THC content average of 28%.

The Platinum Punch cannabis strain is a remarkable sativa dominant strain that tilts the scales with a 70% sativa to 30% indica ratio, bringing you the best of both worlds with a potent high that delivers to the body and the mind.

Along with its ludicrously high THC content, the Platinum Punch also serves up just under 1% CBD content and a fairly impressive terpene profile.

It’s a popular choice for people that want to use cannabis for more than just recreational purposes.

This strain does not mess around in the strength department. It comes out swinging with a 28% THC right-hook that certainly won’t hesitate to put you in your place if you disrespect it.

Those new to the world of cannabis: be advised to consume with consideration.

This strain may be a little overwhelming.

If this is your first round with the Platinum Punch strain, perhaps it’s a good idea to have a trip-sitter with you to hold space and keep you grounded.

From the moment of the first hit, you’ll immediately feel the sensations of this strain taking effect, sending waves of euphoria tingling throughout your body, shortly followed by feelings of hyper-focus and a general sense of happiness.

Many Platinum Punch strain users have reported cases of the giggles and feelings of heightened state of creativity.

Many people also use the Platinum Punch for its therapeutic and restorative properties, benefiting from its terpene profile that ease various ailments and disorders.

Caryophyllene is one of its dominant terpenes, and it is commonly used for fast-acting pain relief.

Another is limonene which does wonders for treating anxiety and depression and easing inflammation. The Platinum Punch weed strain tends to make you drowsy, making it ideal for those who struggle to sleep.

The terpene profile in the Platinum Punch cannabis strain contributes to its earthy and fruity fragrance tones.

Its enticingly tasty fragrance is evident from the moment you’ve opened up the jar, though once you’ve broken up a bud, the true aroma comes to life, unveiling scents of spicy citrus and black pepper.

It’s as if it has a more refined scent, something that speaks with a certain maturity compared to its candy and bubblegum flavored counterparts.

Download my free marijuana Grow bible so you can grow your own Platinum Punch!

For all the positive aspects of the Platinum Punch weed strain, it’s nice to know that In-House genetics did not compromise on flavor. Platinum Punch tastes just as divine as it smells and goes down just as smooth.

The initial flavor is a sweet fruity taste, like a combination of mangoes and berries, with a hint of citrus and fuel.

That welcome parade of flavor leads to a slightly spicy undertone with elements of herb and pine to round off the experience before you exhale and start feeling the tingle slowly start working through your body.

Generally, when it comes to marijuana, people will often claim that the best thing about it is its THC content and overall potency.

In the case of the Platinum Punch strain, its potency is both a blessing and a curse. Depending on who’s smoking it, of course.

Platinum Punch strain weed can average an absurd level of THC at 28%.

These numbers would probably get most veteran smokers just as high as they want to be, but could also leave some newbie smokers questioning if they’re dead or just dreaming.

For a plant this rewarding, it’s surprisingly easier to grow than you’d expect and is likely to flourish both indoors and outdoors if given the correct love and attention.

With a warm, humid environment and the occasional pruning, you could harvest beautiful ripe nuggets coated in a delicious snowy frosting within 6 – 8 weeks.

It fruits incredibly fluffy, yet all-around  dense nuggets that appear covered in frosted sugar amidst a legion of tiny neon orange hairs.

The plant’s foliage is just as impressive, with subtle, purple tinting along the surface of the leaves.

With the proper climate control and if you allow the plant to experience slightly cooler temperatures right before it goes into flowering, you can accentuate its purple shades and even bring that color into the buds.

As mentioned, the Platinum Punch strain can be grown indoors and out.

The strain has a flowering period of around 6-8 weeks, with harvests in late September to early October. Indoor yields range at about 14 oz/Sq meter. Outdoors, you can expect to yield 16 oz/plant.

Is Platinum Punch an indica or sativa?

Platinum Punch strain is a sativa dominant hybrid. It’s a strain composed of both a sativa strain and an indica strain but most of its genetics lean toward the sativa side of the family.

What is the strongest platinum strain?

The holder of the “Strongest Platinum Strain” title has to go to Platinum OG. It’s incredibly uplifting and euphoric, but also includes a complete body-stone kind of high. If you do get your hands on this strain, don’t say we didn’t warn you.