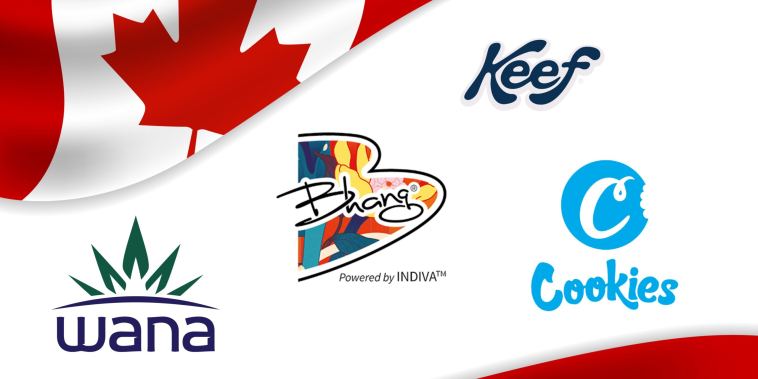 It’s been three years since Canada legalized adult-use cannabis, and already, some of the most popular brands on the market hail from south of the border.

As of August, Colorado-based Wana Sour Gummies held 38% of the edibles market, according to HiFyre. And Bhang chocolate, the award-winning California-based edibles brand, is among the top-selling cannabis-infused chocolates in the country.

Of course, products aren’t being shipped over the border between legal states and Canada. Instead, they’re making their way to Canadian customers via licensing deals.

Canadian companies buy the rights to use American intellectual property and genetics, then make and package according to Canada’s regulations.

That’s how California-based Cookies made its way north: headed up by rapper Berner. Cookies Canada launched in Ontario with two cannabis strains: Gary Payton and Georgia Pie, both selling out within days.

And Colorado-based drinks company Keef, which makes infused sodas like Bubba Kush root beer, recently launched in Canada. The result of Stigma Grow partnering with BevCanna to bring the infused beverages to market.

But are there any differences between what’s sold in American markets versus what’s on Canadian shelves? And why are some so popular? Leafly took a closer look.

Start with a Bhang

When London, Ontario-based Indiva signed its first licensing deal with Bhang in 2018, president and CEO Niel Marotta said there were some doubts about the idea.

“We had a lot of people saying, why would you license a brand? Nobody knows the brand name. Anyone can just put cannabis into chocolate” he said in a phone call. “But we knew better than that. That’s just not true.”

With a background in capital markets, not cannabis processing, Marotta said Canadian consumers are accustomed to US brands coming to market. And if customers were loving Bhang in Colorado and California, he thought they would likely love it in Canada, too.

So far, he’s been proven right.

Despite their US brand roots, Marotta said he still considers the products Canadian. He credits the success of Bhang and Wana not just to the US brands who created the recipes, but also to the manufacturing and office staff in Canada who have been able to meet demand quickly and with consistency.

Beyond packaging, where Canadian labels are far more restricted, one of the most obvious differences between American edibles brands in Canada is potency: Bhang bars, for example, come in 100 mg formats in the US, while Canada is limited to 10 mg per package.

That limit is likely eating into the edibles market share and driving more experienced consumers to other sources, he said. If that limit was increased, the edibles market — and brands like Wana and Bhang — would likely grow to be even more successful.

“There’s still a group of folks that have higher tolerances, be it from prior medical use or being heavier cannabis users,” explainsMarotta.

“And I think there’s a public safety issue here where if we’re not allowed to provide a safe legal alternative in terms of the potency of edibles in the package, it will keep this category as undersized and it will need to drive people back to the illicit market.”

Licensing intellectual property for processed cannabis products is one challenge, but replicating a consistent source of California flower in a Canadian facility is another.

This is exactly what Cookies set out to do with partner Gage Cannabis, who they had already worked with on a number of dispensaries in Michigan.

Together, working with Canadian cultivator Noya Cannabis, the team at Gage and Cookies were able to bring the popular Gary Payton and Georgia Pie strains to the Canadian market.

“If you open a blue bag right now in Toronto, you should have the same experience that you would if you did it in San Francisco in our store on Haight,”

said Crystal Millican, the VP of retail for Cookies, in a phone call.

But the blue bag is distinctly different—gone are the playful illustrations on US bags, replaced with a solid blue colour with a big “C” at the top. The name Cookies, after all, could be considered appealing to children—a big no-no in Canadian branding regulations.

Luckily for Cookies, the freedom to market and hype up their cannabis flower in the US—founder Berner has 1.8 million followers on Instagram alone—likely helped them to completely sell out of the products within days of launching.

That high demand has also meant the prices for Cookies strains. The pre-rolls are currently priced at just under $18 on the Ontario Cannabis Store website.

“The hype behind the brand and the development behind what was established already from the Cookies community, and being able to bring that to Canada is what excited everyone to want to go out and purchase it. Even if their store is selling it for higher prices,” said Cassia Bommarito, marketing ops manager for Gage Canada, in a phone call.

The US brand invasion is not over

Cookies plan to expand to other provinces, bring more of their signature strains, and will even open a flagship store in Toronto in 2022. Gage has extended their licensing deal by two years, to the year 2026.

The influx of US brands with Canadian licensing deals will continue to make their way to market. TREC’s recent acquisition of Agripharm, for example, gives them the exclusive rights to more award-winners from the US—Bakked and O.pen.

As for Indiva, they’ve also launched homegrown edibles brands such as Ottawa-based Slowride Bakery. Their licensing deal with best-selling Wana has another three-and-a-half years, but that could be complicated by Canopy Growth’s recently announced deal with the Colorado company.

The deal allows Canopy to acquire Wana in full, but the deal is contingent on federal cannabis reform in the US—something that’s far from a sure thing at this stage.

“It’s not 100% clear how everything’s going to go,” said Marotta. “But we’re enthusiastic about this. We think it’s a great testament to the brand, seeing Canopy buy Wana and maybe a testament to the licensing model, too.”

Some of Canada’s favourite cannabis brands are American originally appeared on Leafly.com