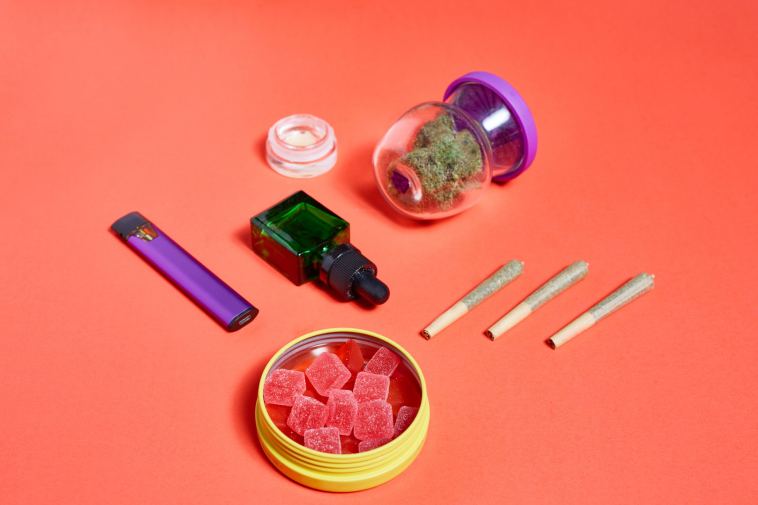 Have you ever wondered why the high from smoking cannabis is so different from the high when consuming edibles? As someone who smokes weed all day, every day, I have.

While quality edibles are a discreet way to use cannabis, an edible high can be unpredictable, especially for new consumers. Smokables are harder on the lungs and less discreet but provide a predictable, strain-specific high that typically gives the smoker more control over their experience and is preferred by most cannabis consumers.

Find all the highs on the Weedmaps app

Personally, smoking makes me feel happy, productive, and able to live my life free from anti-anxiety meds. Edibles — especially those containing distillate — tend to have a heavy, THC-forward effect that makes it hard for me to be productive when I’m alone. In public, I often feel uncomfortable or riddled with anxiety, neither of which happens when I smoke.

Why a smoke high is different from an edible high

According to a 2022 study from Headset, smokable products like flower and pre-rolls accounted for roughly 53% of nationwide market sales, followed by vape pens at 22%, and edibles at 12%. This study also showed that flower sales have been steadily declining, with edible sales increasing year-over-year.

In the hopes of merging the disparate worlds of edible products and smokable highs, smoke researchers with the biotech company Real Isolates have discovered how to do just that with their brand new extraction method and resulting extract, Smokenol.

Smokenol, which earlier this week received a patent for a novel method used to extract cannabinoids and other compounds from cannabis smoke, uses a convection oven, a pump, and a specially designed filter to capture the chemical fingerprint of cannabinoids, terpenes, and other chemical compounds of strain-specific smokables like flower or concentrates after combustion.

“Edible highs have historically felt different from flower highs for three reasons,” said Andy Westerkamp, creator of Smokenol and co-founder of Real Isolates. “The first two reasons are absorption and metabolism. When you smoke, it’s absorbed through the lungs and it kicks in quickly. With edibles, it’s absorbed in the stomach and the liver and in your small intestine, which metabolizes THC to 11-hydroxy, making it more potent and more psychoactive, which can cause some of those experiences that people don’t love.”

He continued, “But there’s a third reason that no one ever talks about, and that’s what we study, which is that if most people prefer the effects of smoking and we’re using extremely high temperatures when we smoke, we’re actually transforming everything in the plant material or concentrate that we’re smoking. All of that happens before you inhale, so what you’re inhaling has been completely transformed from its original chemical makeup by high temperatures.”

Each cannabinoid can transform into about 18 to 20 other cannabinoids when it comes into contact with heat. Thus, the chemical fingerprint of OG Kush in flower form is entirely different from the chemical fingerprint of the smoke that gets you high. Even with “strain-specific edibles” in their current form, many of which are created by adding terpenes back into the mix to try and recreate the terpene profile of the strain, or using a live resin or rosin extract in the edible, the high you get from consuming them bears little to no resemblance to the high you would get from smoking the strain.

Smoke extracts pull the chemical makeup differently from the smoke, offering brands the option of creating strain-specific products from their best-selling smokables for the first time ever. But how does this new extraction method work? It’s quite simple.

“I use vacuum ovens and vacuum pumps, which are standard pieces of equipment that I would say every single cannabis lab has,” explained Westerkamp. “We use the ovens as a giant smoking device. So we fill ovens with smokeable material, whether it’s biomass or flower or concentrates, and crank the temperatures up.”

He continued, “We create smoke and the smoke passes through a filter that we’ve designed. That’s our special invention. It selectively captures cannabinoids and terpenes out of the smoke because there are 2000 or more compounds in the cannabis smoke, and not all of them are awesome for you. The stuff that we want, like cannabinoids and terpenes, is captured by the filter, and then the rest of the stuff in the smoke flows out through an exhaust pipe. What’s left in the filter is the extract, which can then go directly into edible, topical, or vape products.”

Westekamp believes his technology will transform the current extraction landscape due to the affordability of the setup and the creation of a whole new category of cannabis products. These products could appeal specifically to people who, for whatever reason — be it respiratory, wanting to remain discreet, or otherwise — can’t smoke but miss the high you get from smoking flower. Like Willie Nelson, for example.

Instead of creating the extracts themselves, Smokenol’s model centers around selling the extraction setup — convection oven, pump, and filter — to brands and manufacturers who are then free to create product versions of whatever smokable they want with the equipment.

“A manufacturer could spend six figures or you know, a million or more bucks, to set up a traditional extraction lab,” said Westerkamp. “With Smokenol, all you’re talking about is a vacuum oven, vacuum pump, and filter. We provide the filters. Most manufacturers already have the ovens because most cannabis labs do, but if they don’t, they’ll need to purchase an oven and a pump as well. Then they’re off to the races.”

While this is all very exciting, it’ll still be a while before Smokenol products hit dispensaries. Until then, consumers wanting a more nuanced edible high should look for the following traits when perusing edibles at the dispensary or online.

Your edible high may soon feel like a smoke high thanks to this biotech breakthrough originally appeared on Weedmaps.com