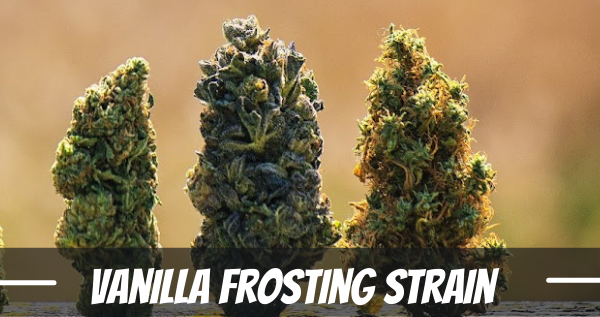 grow? Something that provides an uplifting head-high, and an alluring aroma that makes you want to climb in the bag and just live there? Well, then the Vanilla Frosting strain is the strain for you.

Often growing as tall as 8 feet and genetically leaning more towards the indica side at 65%, the Vanilla Frosting strain is a hybrid masterpiece combining legendary Humboldt Frost OG and Humboldt Gelato BX3 both into one tasty strain with sweet flavors and divine floral undertones.

Vanilla Frosting provides a potent high that invigorates the mind while simultaneously relaxing the body, giving you the best of both worlds by allowing you to maintain a physical calmness but still be the Captain of your cognitive abilities and daily life.

Thanks to its hybrid robustness, Vanilla Frosting yields are sturdy vanilla-scented crops with dense, grainy buds producing between 20% and 25% THC contents.

With its dominant profile terpenes being beta-caryophyllene, beta-myrcene, and terpinolene, it’s become a therapeutic go-to, making it a favorite for those looking to use cannabis in a holistic sense to ease stress and fatigue, and other ailments.

As its name and delicious aroma suggest, Vanilla Frosting strain will give you a truly flavorful toke that you’re sure to enjoy, inciting creativity and sparking the imagination.

It’s the type of strain that’ll have you putting down the joint and picking up a paintbrush.

However, be sure to take your time and savor it, as this strain may seem kind, it can be quite potent, and the high will most certainly creep up on you. So take it easy, cowboy.

Have you been thinking about new strains to try? We’ve collected our twelve favorite sativa-dominant strains to give you some place to start. Here are some of the best sativa strains for growing and enjoying.

Users of this flavorful strain love using it to combat headaches and migraines, since it can be calming and sleep-inducing, thanks to its beta-myrcene levels. Hence the Vanilla Frosting strain Is best used for those painful moments or sleepless nights.

Its high THC content results in long-lasting highs, euphoria, and general all-around calmness, along with the added benefit of killing stress and reviving your overall energy.

The initial scent to take note of when you take a whiff of this decadent strain is the familiar aroma of sweet vanilla. This is rounded off with an allure of floral undertones, all hinting at its divine smokable flavor.

Once you’ve broken open a frosty resin-packed bud crammed with thick white crystal trichomes, a dense aroma of both sweet and spicy welcomes you.

It’s the perfect way to end a long day – by unwinding and elevating, the Vanilla Frosting strain is both the main course and dessert.

When it comes to flavor, it’s clear that the Vanilla Frosting strain lives up to its name.

Its distinct taste is palatable from the very first toke, boasting an unmistakable smooth and creamy vanilla frosting flavor, making for an exhale worth savoring.

Sprinkled with hints of floral and herb, and just a touch of earth, the Vanilla Frosting strain’s taste palate includes subtle spicy/peppery flavors, especially on the exhale.

Among the many positive qualities of this plant, it’s definitely its unique scent and flavor that make this strain a heavyweight contender in the cannabis world.

The ten strains we’ve selected in this article are what are known as Indica dominant strains, meaning that they contain a majority of Indica genetics, but also have some Sativa genetics and properties as well.

As sweet and decadent as Vanilla Frosting strain may seem, it doesn’t come without a punch and may cause anxiety, paranoia, or panic in the novice smoker.

This incredible strain can invigorate your mind and spur creativity, and that’s the exact reason why consuming Vanilla Frosting before heading off to bed is not recommended.

Other than the common red-eye and cotton-mouth that’s associated with most other strains, there’s not much one could say to discourage you from enjoying this potent and pleasant dessert.

Once planted, you’ll find the strain’s hearty stalks deter breakage, resulting in a strong foundation for future growth, leaving your mind at ease in regards to the integrity of your crop.

Whether you’re a seasoned grower or someone who’s just starting out, Vanilla Frosting grows with ease.

With outdoor grows, you should expect much larger Vanilla Frosting strain yields as some plants can reach as high as up to 8 feet tall.

Fortunately, its tendency to grow dense, yet nicely spaced, buds make for much easier trimming when the time eventually comes.

Vanilla Frosting buds have a silvery green shade to them, accentuated with a touch of purple hues and scattered orange hairs that make it a feast for the eyes.

With such a pleasant growing experience, any grower would be lucky to get their hands on some Vanilla Frosting strain seeds.

The vanilla frosting strain is a breeze to grow, it just takes a little know-how and some patience.

Depending on which strain you have, be it indica or sativa dominant, you can expect your flowering time frame to be around 7 to 8 weeks and 9 to 10 weeks, respectively.

However, these time frames will vary depending on if you’re growing indoors or outdoors. Vanilla Frosting strain yields can be as much as 4 ounces per square foot indoors and an average of 6 ounces per plant outdoors.

Is there more than one Vanilla Frosting strain?

Yes, Different breeders can create different versions of the same strain. Humboldt Seed Company is one of five breeders of the Vanilla Frosting strain.

Is Vanilla Frosting an indica or a sativa?

There are different versions of Vanilla Frosting, so it depends on which one you have. This strain review’s version is the indica dominant strain.

What is the Vanilla Frosting Strain flowering time?

Indica dominant versions of this strain can flower within 7 to 8 weeks, while the sativa versions can take 9 to 10.