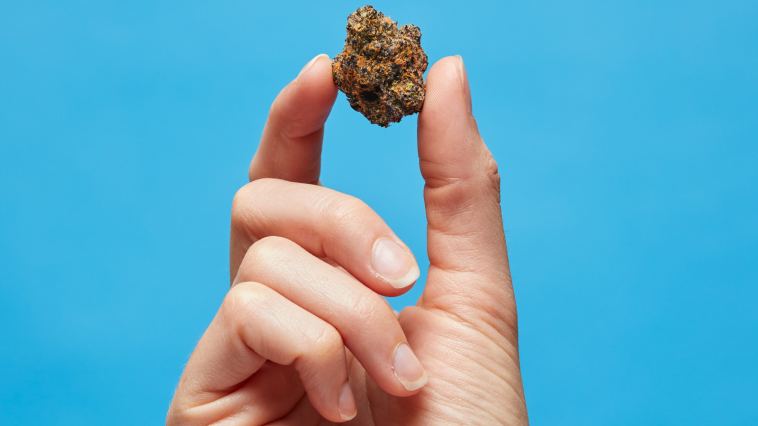 If you’ve seen the term “OG” pop up in online media or social feeds, I won’t blame you if you have only a vague idea of what it means. Most of the time, it seems like an internet slang term that could refer to anything and everything. Urban dictionary’s top definition says it used to mean “original gangster” but is now used as a shorthand for “original.” A quick Twitter search for #OG ran the gamut from workout goals to happy birthday wishes to pictures of adorable dogs in winter sweaters. So, what the hell does OG actually mean?

The short answer: it means a lot of things to a lot of different people. In weed culture, OG are two letters you will see in front of a lot of strains that feature the parent strain, OG Kush. Given the frenzied pace of strain breeding right now, hot new strains come and go, but OG Kush has maintained its indisputable popularity. It’s even Weedmaps’ number one most popular strain and reigning Strain Madness champion.

This sativa-leaning hybrid is best known for its epic potency, with THC percentages regularly coming in at 20-25%. Some OG Kush consumers report long-lasting effects that land more in the head than the body, while intensifying sound and color. Described as having an earthy, berry, or citrusy taste, this happy, giggly, and relaxed strain is outstandingly social. No wonder strain breeders seek its parentage.

Now that we know what to expect from consuming this uber popular strain, let’s dig into its weed culture nomenclature — and there are a lot of theories. Some say it’s an acronym for “ocean grown,” “original gangster,” or a shortened version of the word “original.”

To know what OG means, you need to know the names of two cannabis growing forefathers who first became friends and roommates in Los Angeles in the early 1990s: Matt “Bubba” Berger, who currently works as a consultant and dispensary owner in Denver’s legal cannabis market, and Josh Del Rosso aka Josh D, Founder and Managing Director of Josh D Farms.

In Berger’s telling, he cultivated the strain in Florida from a random bag of flower he got from a friend in 1992. Another friend, impressed by the strain’s frosty colas, said the buds resembled “kushberries,” which was then shortened to “kush.” In 1996, Berger returned to LA with his kush seeds, and he and Del Rosso planted Kush, Bubba (another of Berger’s strains), and Purple Indica in the crawl space of a rental house they shared.

Word of Del Rosso and Berger’s Kush strain took off and demand soared, reaching $8,000 a pound in the late 90s — that’s around $13,400 in today’s dollars. But with success came imitators hoping to cash in on the Kush phenomena. Del Rosso and Berger added “OG” to their original Kush to distinguish it from all the others, which stands for “original.” Adding one more layer of confusion, Berger and Del Rosso’s Kush is totally separate and unrelated to landrace kush, an indica that originated in Afghanistan.

OG Kush was hugely popular with 90s consumers, largely for its inclusion in hip hop culture in Los Angeles. It’s been said it was a favorite of super star pot celebrity Snoop Dogg and rapper B-Real of the West Coast hip-hop group Cypress Hill (who later released an album titled Greatest Hits from the Bong in 2005).

What does OG mean in pop culture?

So how did the term OG catch on in pop culture? That’s a winding road that leads back to the early 1970s, originating with the LA-based gang the Crips. Originally, it was an all encompassing term that stood for “original gangster” and simply meant that they were literally the first, e.g. “OG Eastside Crip.” Over time, the term broadened and evolved, and could refer to someone who showed extreme loyalty to the gang. The term was also used by younger members when referring to the elder gang members as a sign of respect.

As hip-hop and rap music began their mainstream ascent in the 80s, the term OG began to shift from gang culture to rap music and videos when artists sometimes referred to exceptionally badass aspects of gang culture as OG. Rapper and actor Ice-T may be most responsible for bringing the term to a wider audience with his album and single of the same name, “O.G. Original Gangster,” which reached #7 on 1991’s Billboard rap chart. The could be what inspired Del Rosso and Berger, but that’s impossible to know for sure.

Eventually, the term seeped into establishment culture and continued to expand its meaning. Today you see it everywhere as a reference to something or someone that has exceptionally impressive skills, exemplifies a particular quality, or is the first of its kind.

Where can you find OG strains?

Though OG Kush has been around since the early 90s, its contribution to cannabis is influential, ongoing, and shows no signs of stopping. It’s nearly on every dispensary and delivery menu. Known as a building block strain because of its outstanding genetics, potency, flavor, and aroma, OG Kush is frequently used in successful cross breedings that have propagated many well-known strains.

Here’s a few of our favorites:

GSC is a relatively new strain that has a huge influence on cannabis culture — just as OG Kush did in its early days. Rapper Berner started the Cookies company after GSC exploded in California dispensaries. Today, GSC hybrids can be found all over the world.

This super strong strain is considered to be the most notable OG Kush phenotype because it was crossbred from the seeds of the parent strain.

A well-known phenotype of OG Kush and an unknown Afghani strain, SFV OG is known for its uber-potent effects.

This indica-dominant powerhouse is a cross between OG Kush and Northern Lights. It was a complete accident by Berger whose strains cross-pollinated in his garden and bore Bubba Kush.

A sativa-dominant hybrid made from OG Kush and SFV OG, Fire OG is mentally uplifting and physically relaxing.

The True OG creators repeatedly backcrossed OG plants until they developed this indica-dominant hybrid with creative and sleepy effects.

A crossbreed of OG Kush and Sour Diesel, Headband is known for delivering a  heady, focused, and relaxed high. Some say its potent cerebral effects seem like wearing a “headband.”

From the breeders at Dutch Passion, this award-winning strain is a blend of Blueberry, Gorilla Glue (GG), and OG Kush. A fruit forward aroma and high THC is perfect for steady consumers.

What does OG mean in weed? originally appeared on Weedmaps.com